Baby Puss is a 1943 one-reel animated cartoon and is the 12th Tom and Jerry short.

Nancy is playing house, and pretending to be the mother and has also dressed Tom, apparently the family pet, up to be her pet kitten. She is scolding Tom, who is hiding under some furniture. She drags Tom out by his tail and threatens to spank him. Tom is resentful over his treatment and feels embarrassed. She carries him to the bassinet, tucks him in, and shoves a bottle of milk in his mouth. She warns him, under threat of more spanking, to stay in bed while she goes downtown to buy a new girdle. Indignant at first, Tom gets a taste of milk and quickly accepts his lot, mumbling like a baby and drinking from his baby bottle.

Jerry peeks from behind a doll house and sees Tom. Incredulous at first, Jerry proceeds to mock him by playing "Rock-a-bye Baby" on the turntable and pretends to be a baby himself. Tom is furious and chases Jerry into the dollhouse. Just when it seems that Tom has Jerry cornered, Nancy returns and scolds Tom again. Tucking Tom back in bed, Nancy threatens to feed him castor oil if he gets out again. Tom goes back to his role playing. Jerry emerges from the doll house and runs to the window to get the attention of three cats, Meathead, Butch and Topsy, who are just outside. they arrive in the window, When the trio see Tom, they begin to make fun of him. When Tom confronts the other cats, they continue to tease and humiliate him, tossing him like a ball causing him to land in a fish bowl resulting in a wet diaper. They then proceed to change his diaper with oil and powder, before fitting him with rubber pants.

The three cats are caught up in their abuse of Tom, singing "Mama Yo Quiero". Jerry looks behind the window and cackles. Then Nancy reappears and the other three cats rush off from the scene, leaving Tom to take the heat. Tom, as promised, gets scolded by being forced to have a spoon of castor oil. Tom resists, but with a little help from Jerry by squeezing a nutcracker on his tail, he takes the castor oil. He immediately feels nauseous, and rushes off to be sick out of the nearby window. Jerry, victorious, continues to laugh at Tom's humiliation. However, his triumph is short-lived as karma catches up to him, in the form of the castor oil spilling down from the high chair, and right into the mouse's laughing mouth. Jerry is also immediately overcome with nausea and rushes to be sick out of the window next to Tom. 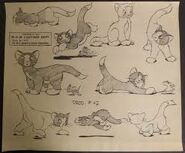 Framed screenshot of this short.
Community content is available under CC-BY-SA unless otherwise noted.
Advertisement