Tom and Jerry Wiki
Register
Don't have an account?
Sign In
Advertisement
in: Dogs, Minor characters, Tom and Jerry: The Magic Ring Characters,
and 16 more

For the cat, see Butch Cat. For the gray dog, see Spike Bulldog.

Butch Dog (Irish: Butch Madra) (also known as The Irish Dog or Spike) (Irish: An Madra Éireannach) is a dog mostly portrayed as evil, he is a friend/enemy of Droopy who is technically smart and dumb at the same time. He was created by Frederick Bean Avery, Butch is his 2nd famous character behind Droopy. He appears in Tom and Jerry: The Magic Ring, Tom and Jerry Meet Sherlock Holmes, Tom and Jerry & The Wizard of Oz and some other shows.

Butch along with Droopy can be seen working together as either guards or police deputies in Tom and Jerry Meet Sherlock Holmes, Tom and Jerry & The Wizard of Oz and in the episode Mr. Nobody.

He is greedy, in one episode he wants a Leprechaun (Irish: Leipreachán) because he thinks it make him rich. In another episode he tries to get rid of Droopy to be the "Lucky Dog" and be rich. In the movie "Tom and Jerry Meet Sherlock Holmes" he locks Droopy in a room full of explosives so Droopy wouldn't get the money prize that the police sheriff offered who'd catch the criminal first. But because of Cartoon physics Droopy even though clearly he was in the room appears not in the room and then Butch opens the door and the Explosions blast him making his head look like toast. In the end of the movie though, Droopy gets the reward he deserved and Butch ends up with nothing. He also tries to trick him because he's in love, in the Chump Champ he tricks Droopy to get rewarded a girl that looks "cute". Technically Butch wins but when the girl is revealed she's super ugly, Butch screams and runs away but the girl chases him, and Droopy gets the crown.

Him and Droopy can be Neutral/Friends sometimes, also in Tom and Jerry Meet Sherlock Holmes they play the Toccata and Fugue on the piano together, albeit sending Tom and Jerry flying and they break the glass window to hay with a pitchfork, because of whom were stuck inside the piano and Butch and Droopy were playing too loudly, but overall he and Droopy don't collaborate well together

In The Tom and Jerry Comedy Show, Butch is replaced with Spike Bulldog who is enemies with Droopy and caused confusion if Spike or Butch were the same dog, but when Butch finally returned in Tom and Jerry: The Magic Ring it finally cleared up the confusion as both Butch and Spike appear in the film.

In Double Dog Trouble it is revealed that he has a twin brother named Spike, who gets as mad just like him but unlike him he acts like an ape when he gets mad, a song that only Butch knows calms him down.

"Guards! get this man some water!" - Bars and Stripes

"You stop those guards, boyo, and there will be a nice tip coming your way" - Who Sled the Dogs Out?

"Those fireworks should be going off any minute now, then victory is mine!" (before the fireworks get blown up in his face) - Who Sled the Dogs Out?

(While in the paddy wagon) Butch: How do you like that? me own countrymen, and they wouldn't believe me, and i had him in me palm of me hand i give! Leprechaun: Tsh, Tsh, Now ain't that a shame, and just what you have in the palm of your hands? Butch: Ah, you wouldn
't believe it either, but i have me a real... (Realizes) LEPRECHAUN?! A live leprechaun! (looks again) AH, I'M RICH! (No one hears and the Paddy wagon still drives to some small town near Dublin.) - Droopy Leprechaun

i feel right at home now 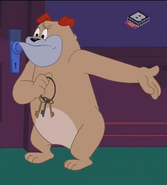 WHAT THE-
Community content is available under CC-BY-SA unless otherwise noted.
Advertisement