Calaboose Cal is a recurring character from Tom & Jerry Kids. He is a mouse-exterminator and a gold cat owner of shows of demonstration and participation. He has also starred in some segments such as Calaboose Cal 495 and The Mouse is Quicker Than the Eye. He lives in Costa Mesa, California. His assistant in some segments is Miss Vavoom who regularly appears in the Droopy and Dripple segments, whom he usually refers her as the "Mystery Lady". He was voiced by Phil Hartman.

Calaboose Cal is a yellow anthropomorphic cat whose appearance is somewhat based upon the character of Top Cat from Top Cat. Calaboose is very tall and rotund, and has a humanoid snout and a long bushy tail, and usually wears a white shirt with a pink jacket over it, a black bowtie, red pants, a green backwards cap with a "C" on it, and purple sneakers. Some of his alternate apparel involved a suit and tie, a Western outfit and a cowboy hat, and a magician's outfit and a top hat. He often portrays himself as an exterminator whose goal is to entrap mice, and speaks in a Western dialect. He often teaches cats various ways to catch mice and enjoys doing magic tricks. He is sometimes represented as an enemy to Tom. However, he is very prone to misfortunes. 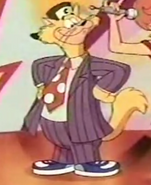 Calaboose Cal in a suit and tie.

Calaboose Cal as a cowboy. 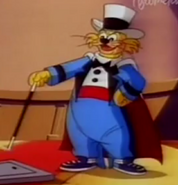 Calaboose Cal as a magician.