Rip Taylor
Captain Kiddie is the quinary antagonist in Tom and Jerry: The Movie. He owns Captain Kiddie's Carnival and has a puppet parrot named Squawk.

Captain Kiddie is a chubby entertainer with a brown mustache and a brown ponytail. He wears a light blue coat with yellow stripes over a purple shirt with a dark purple sash around his waist. He also wears a pair of light blue pants and a pair of black boots, a light blue hat with black stripes and has a puppet parrot named Squawk on his left hand.

Captain Kiddie appears to be quite scatterbrained and clumsy, not even noticing Robyn's picture until Squawk points it out to him. He had originally planned on going on tour with Robyn, but when he and Squawk notice Figg's bounty for her, he changes his mind and plans to trap her on his Ferris Wheel until Figg and Lickboot pay up. Kiddie and Squawk chase Robyn after Tom and Jerry free her until he collides with Dr. Applecheek, sending him and Squawk into the column of the bridge holding into it and was not seen afterwards.

It is unknown what happened to him, although it's presumed he's been rescued and gave up chasing Robyn when the one million dollar bounty reward on Robyn has been called off by Robyn's father, and Figg, Lickboot and Ferdinand have been arrested for their crimes. 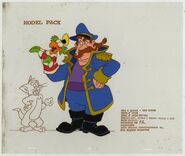