Part Time Pal
Cat Fishin' is a 1947 American one-reel animated cartoon and is the 27th Tom and Jerry short directed by William Hanna and Joseph Barbera, produced by Fred Quimby and animated by Kenneth Muse, Ed Barge, Michael Lah with uncredited animation by Pete Burness and Ray Patterson. It was released to theatres on February 22, 1947 by Metro-Goldwyn-Mayer. The short was created in 1946, a year before it got released in theatres.

The cartoon's title is a pun on "catfishing", which refers to the activity of catching catfish, even though catfishes do not appear among the fish in this cartoon.

By a lake, signs are posted that say "no fishing", "keep out", "private property", "no trespassing", and "beware of dog". Spike is shown guarding the fence asleep. Tom (who doesn't seem to care.) shows up with his fishing gear and he passes through the gate. However, Spike just happens to yawn and recline on Tom's leg. Tom tries to get away, but Spike thinks Tom’s leg is a bone and grabs at it a second time. Spike licks the leg and takes a bite into it; this being Tom’s leg, it causes the cat to scream. Spike wakes up and looks around, but does not see anyone, as Tom hides behind Spike as the bulldog moves around. When he turns around again, Tom sits on the top of his extended fishing pole. Spike still does not see him and goes back to sleep. Tom then walks towards the lake, but as he walks, the hook on his fishing pole hooks Spike’s collar and drags him along. As the line tugs, Tom looks back and sees Spike about to fall off a small cliff of dirt. Frantic, the cat catches Spike and props him up with a stick. Tom then goes over to the lake and starts to fish.

In his tackle box are plugs, lures, wigglers, flies, and live bait who was Jerry, sleeping. Tom wakes up Jerry, and the annoyed mouse takes off his robe with a look of disgust on his face. Tom then ties Jerry to his line and casts. Jerry is about to hit the water when he suddenly stops and dips his toe in the water to test the temperature. The water is ice-cold, and Jerry races back to the tackle box with his blanket, shivering. A bunch of fish starts making noise and Tom lowers Jerry over the water to feed them with. The fish leap at him and Jerry fights them off, kicking and punching. Having failed, Tom casts again and Flappy emerges. Jerry is cast into and is propelled out of, the fish's mouth. The fish chases Jerry, chomping all of Tom’s fishing pole in the process. The fish swats Tom with his tail and returns to the water, where he spits out Tom’s reel and throws it at Tom. Tom then cuts a finger off a rubber glove and puts Jerry inside, making him look like a worm. Tom casts again and the fish is ready for Jerry. He ties a napkin around his neck and brings out a fork, knife, and dish ready with lemon and butter. Jerry, however, is on the ball and avoids the fork. As the fish leans in closer, Jerry squeezes the lemon into the fish’s face, beginning another chase. Tom grabs an oar and swats at the fish as the chase reaches the pier where he stands. Incensed, Jerry emerges from the other side of the pier with a lump on his head and gets back at the cat by grabbing the oar and knocking Tom into the water. Jerry then ties a flame hook onto Tom’s tail and dangles it over the side of the pier, provoking Flappy to bite Tom’s tail and Tom screams in pain. The fish pulls at Tom’s tail and he hangs onto the pier with his claws. Tom wins the tug-of-war with his tail, but unfortunately, this leads to the fish flying into Spike’s mouth just as the dog is waking up. The fish comes out and swats Spike, then Spike realizes that he is balancing on a stick, which promptly collapses. Spike looks around and sees Tom paralyzed with fear.

Tom dives in to escape, while Spike looks into the water. Tom emerges through a loose plank in the pier and swats Spike with it, and the dog falls. Tom then grabs Jerry and his pole and runs away until Spike emerges from another loose plank and chases Tom back to the end of the pier. Tom sidesteps Spike and Spike falls in, helped by a kick from the cat.

Finally safe for now, Tom runs over to a rock and sees the fish again, so he casts his line again. Jerry then swims underwater and toward Spike who is lying on another pier. Seeing a good chance to frame the cat, Jerry unties the line from himself and ties it to Spike’s foot, then tugs on the line to alert the cat of a bite. Tom yanks the line and gets the dog to fall off the pier and through the water. Spike, seeing the problem, grabs onto the pier, but the continued backward force causes all the boards to stack up and then come loose. The dog, followed by the boards, falls into the water.

Tom does not give up the fight, and Spike is squeezed through a pair of rocks on the way back to the cat. Jerry then hands Tom a club to knock out the "fish," and the oblivious cat, believing he has caught the fish and not noticing his bait next to him, wades out into the water and hits Spike in the head multiple times.

Eventually, Tom sees who he is attacking and yelps with fear. A lump forms on the dog's head, and the cat tries to remove it by pushing it down and lightly hammering it down. When it returns a third time, Tom hits the dog one more time, which removes the lump but angers the dog even further. Jerry lowers a fishing line to Tom to help him escape from the dog's bite as the chase passes under the tree where the mouse is, but he also teaches Tom a lesson by dangling him within the dog's range and pulling him repeatedly out of the way as Spike resumes his process of biting at him. 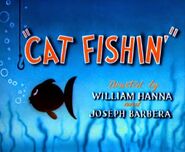