Surry was born in Chelan, WA, where his father and uncle owned an orchard. By 1922, his family moved to San Diego, CA, and he also enrolled in the Otis Art Institute as a second year student.

Not much is known about his tenure at Walt Disney Studios, he met his wife there, and left by 1933.

Surry was first credited in the 1933 short "Going to Blazes", and worked on cartoons there for a few years, one of his coworkers, Tex Avery, decided to leave the studio to go work at Warner. Bros, he left Lantz alongside Tex, Virgil Ross, and Sid Sutherland.

It's not known how long he worked at WB, all we know is that he was in Tex Avery's unit alongside the other people from Lantz. He is only credited on three shorts, but he likely also did other work since WB used a revolving system for crediting animators.

In 1938, he joined MGM and worked on various projects until he got thrown into the Hanna-Barbera unit. Starting with "The Midnight Snack" Surry is an animator, he typically animated wacky, off the wall sequences and fast paced chase scenes. The last short he works on is "The Bowling Alley-Cat".

Starting in 1950, Surry went to work at UPA, where he mainly worked on the Mr.Magoo, notably, two of the shorts he worked on won an Oscar. Briefly, he went back to Lantz in 1952 and worked on three shorts, before returning back to UPA. He would remain there until his passing in 1956, at the age of 49.

He was very fond of giving Tom scruffy, very rough fur, his animation is akin to a middle ground between Spence and Zander, and he also liked to draw his Jerry fat. Here are some examples; 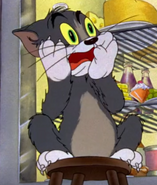 The earliest version of his Tom, the rough, scruffy fur on Tom is a dead giveaway as to whether Surry does a scene or not. He was also fond of exaggerating the animation like Spence and Zander. 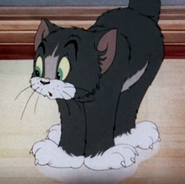 His final Tom design, the scruff is less noticeable but still there, the eyes are more similar to the other animators, and his Tom has more polish. 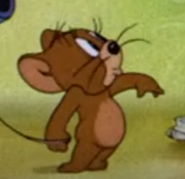 Another clue as to whether Surry did a scene or not is how he draws his Jerry, he was very fond of drawing him much chubbier than the others.

His final Jerry design has no differences asides from being more polished, and strangely more fat in the head.