David Lander (Males)
The Chase School Students are unnamed cat and mice who attend Cat and Mouse Chase School in the final third of Episode 22, Chase School of Season 1 from Tom & Jerry Kids.

The cats and mice are students who sit on opposite sides in the auditorium. The cats are Tom's fanatics and the mice are Jerry's fanatics. The cats and mice look exactly like Tom and Jerry, but have different fur hues, the cats have differently-styled whiskers, and the males usually have clumps of hair while the females usually have long hair that is the same color as their fur or colored differently, and some of the mice have buck teeth, unlike Jerry. They have speaking roles, unlike Tom and Jerry. Some of the students are bespectacled unlike Tom and Jerry, in which some wear square glasses while some wear round glasses.

The tomcats wear white V-neck shirts, orange jackets over their shirts, yellow bowties, and red baseball caps. The tabbies wear orange blouses, orange skirts, and bows. The male mice wear blue sweaters, red bowties, and blue baseball caps. The female mice wear blue blouses, red or blue skirts, and hair bows. The cats usually talk in a high school dialect while the mice usually talk in an elementary school dialect. The teams often debate over which side is better and often cause a lot of vexation, and would eventually attack and hurl each other around, and later throw projectiles such as pans of pies, toy missiles, and brown boots.

(The cats and mice start attacking each other).

(The cats and mice constantly debate until a mouse in round glasses jumps out from the seats and lands into the aisle).

(The cats start jumping out of their seats and land right on him).

(Then the mice start jumping out of their seats and join in the fight).

Mice mock the cats by calling them "stupid" 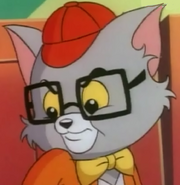 The two sides about to battle against each other

The students are ordered by the professor to settle down

The mice cheering for Jerry

The cats cheering for Tom

The mice join in the fight to the finish
Community content is available under CC-BY-SA unless otherwise noted.
Advertisement