Tom and Jerry Wiki
Register
Don't have an account?
Sign In
Advertisement
in: Characters, Cats, Females,
and 9 more

Cindy-Lou is a character who appears in the Tom & Jerry Kids episode "Birthday Surprise". She is voiced by Teresa Ganzel.

Cindy Lou is a beige-brownish cat around Tom's age and appears exclusively in Birthday Surprise, celebrating her birthday. Hoping to have a mouse of her own as she conversates with a friend through the phone, with Tom overhearing it. so, he tries time and time again to give Jerry to her. Soon, after Tom finally got to give her Jerry in a music box, but she exits the house as She goes with another cat named Gaylord, who is wearing a diamond-studded vest, and inadvertently leaves a heartbroken Tom as she goes in a sports car into the horizon. 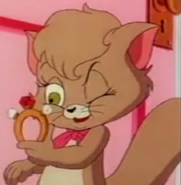 Checking a bracelet's worth 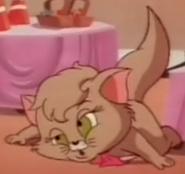 Cindy-Lou after sneezing
Community content is available under CC-BY-SA unless otherwise noted.
Advertisement