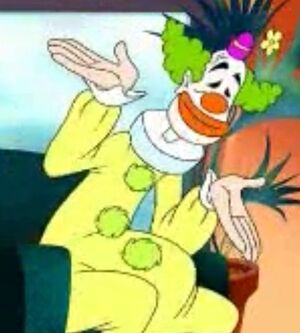 Clown-O is a minor character who appears in Tom and Jerry: The Fast and the Furry. He is voiced by J. Grant Albrecht.

Tom and Jerry: The Fast and the Furry

In the film, he lives with J.W. and he needs a partner, he certainly tells J.W. what animal it would be, but Irving pushes a cage with Clown-O's pet bear, Mr. Frisky. Clown-O thinks Mr. Frisky is pretty dangerous (although Mr. Frisky acts like a good dog). He touches him and Mr. Frisky got him and he runs away in a chase of Mr. Frisky. He is not seen again for the rest of the film, but it is possible that he runs back to his house or the bear infrequently killed him.