Tom and Jerry Wiki
Register
Don't have an account?
Sign In
Advertisement
in: Characters, Cats, Males,
and 4 more

Clyde is a recurring character in Tom & Jerry Kids. He made his first appearance in "My Pal" and starred in some episodes, including "Grab that Bird" and "Clyde to the Rescue".

Clyde is helpful, clumsy, friendly, supportive to most of his cat friends he refers to 'pals'.

Clyde is a tall and obese anthropomorphic cat. His primary fur is light brown with dark brown stripes that bear a heavy resemblance to a tiger. His secondary fur for his hands, feet, muzzle, and belly is cream-colored. His tailpoint is dark brown like the stripes. He has bushy clumps of hair that is parted to the sides. He also has dark brown outlines around his eyes. His eyelids are light indigo. His nose is bright red. He also has buck teeth that are separate from each other.

Clyde calls most of his friends his 'pals', including Tom. Despite Clyde being clumsy, most of times getting accidentally hurt and sometimes accidentally hurting even Tom, he and Tom are friendly with each other. They first met in the Tom and Jerry Kids Show episode, My Pal.

Due to him being a cat and Jerry a mouse, Clyde seems to be enemies with Jerry and he's on Tom's side, since he cheered for him to catch Jerry and handshaked him whenever he 'caught' Jerry, though Jerry escapes most of times due to his cleverness. 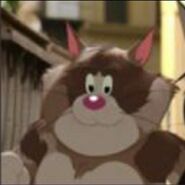