Battle of the Power Tools

"Destruction Junction" is the thirty-first episode of Tom and Jerry Tales, directed by Douglas McCarthy, written by Charles Schneider and storyboard by Charles Visser. 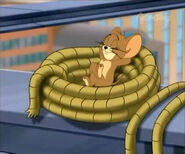 Jerry Resting In Ropes
Add a photo to this gallery
Retrieved from "https://tomandjerry.fandom.com/wiki/Destruction_Junction?oldid=102473"
Community content is available under CC-BY-SA unless otherwise noted.