Tom and Jerry Wiki
Register
Don't have an account?
Sign In
Advertisement
in: Characters, Males, Animals,
and 5 more

View source
watch 01:40
Boba Fett Returns - The Loop
Do you like this video?
Play Sound

Dicky Moe is a whale in the Gene Deitch-era Tom and Jerry appearing in his own episode Dicky Moe.

He is an angry whale who hates pirates, he is the whale that The Peg-Leg Captain has a huge grudge against.

He a giant white whale with sharp teeth and red-light eyes who appears in the ocean and the ship meaning the captain can finally shoot it down, but instead it got Tom Cat stuck on him and the whale swam away with Tom in it. 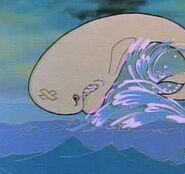