Dog Trouble is a 1942 one-reel animated cartoon and is the fifth Tom and Jerry short.

Jerry is running across a tablecloth, not going anywhere. As Jerry runs, Tom is pulling the cloth like a treadmill. Tom reaches the end of the cloth and Jerry runs across to the other side of the table as Tom gives chase. Jerry tries to stop at the end of the table, but Tom's open mouth is waiting! Although he cannot stop, Jerry uses one of the cat's whiskers to swing himself back out, then escapes into his mouse hole. Tom then knocks on the wall to get Jerry to come out, and patiently waits as Jerry tiptoes through an electrical outlet on the other side of the wall. He sees a piece of cheese on a mousetrap and holds it out for Tom's tail to fall into. When the cat's jumping tail repeatedly misses, Jerry simply does the job himself, and then runs for his life as Tom yelps in agony at his throbbing tail.

Jerry tries to run out the door, but he runs directly into a large sleeping bulldog (Early Spike, in his very first appearance) and almost hits him. Tom's chase runs him into the dog, causing them both to kiss. The bulldog wakes up in rancor at this disturbance and the cat runs away, finding shelter by climbing up a lamp. Jerry gets his due as well when the bulldog hears him laughing at Tom's misfortune and starts to give chase to the mouse instead.

Jerry escapes by climbing up the cuckoo clock, but accidentally activates it, causing the bird to pop out with Jerry hanging onto it, giving the bulldog several failed chances to chomp on him.

In delight, Tom comes down from the lamp, but the alert the bulldog forces him to climb back up. The same thing happens to Jerry, and this time when the cuckoo bird pops out with Jerry on board, the bulldog succeeds in destroying the cuckoo but he misses the mouse. Still, Jerry has to scramble in thin air to hold on for dear life. Tom again tries to sneak away quietly, and succeeds until the floor creaks causing the bulldog to go after him again.

Off-screen, sounds of a horrific brawl are heard, and the mortified mouse resolves to assist his rival in fighting the greater danger. The cat jumps onto a desk as the bulldog attempts to bite him, and Jerry whistles for Tom to join him on top of the clock where it's safe. To avoid the next chomp, Tom leaps all the way to the clock, but his grip is unstable and Tom's whiskers start snapping under the tension. As he starts to fall, the cat gropes in thin air to safety, and Tom extends his paw to Jerry in gratitude. When Jerry loses balance trying to shake the cat's paw, returns the favor and saves him by lowering his tail to pull him out of the bulldog’s mouth, and with this alliance fully sealed, they shake paws.

The new allies connive a plan together; Jerry sneaks across the ceiling sides, down a curtain, and into a sewing basket. He ties a piece of the long thread of yarn to his body and starts to sneak through the house. As a cover for Jerry's plan, Tom taunts the dog and holds out his tail, continually pulling it up every time the bulldog tries to bite it. Meanwhile, the mouse has woven the entirety of the yarn through the house as a trap for the bulldog. As the dog pants angrily, Jerry pulls up behind and kicks him in the rear, causing the dog to scream in pain. When the bulldog lands, he sticks out his tongue and throws the bulldog’s lips over his own face, provoking the bulldog to chase him around the corner. The mouse then hides and leaves the bulldog to fall into the yarn trap, completely wrecking the room. This causes Mammy Two Shoes to promptly enter and survey the scene and the bulldog is then dragged across the floor by Mammy and thrown out of the house, as he is not her dog at all.

Tom and Jerry wave to the bulldog as they watch him get thrown out, and Tom breathes a sigh of relief until a snap is heard behind the curtain they are hiding. Tom's tail has gotten caught in another mousetrap, and despite Jerry's mournful denial, the chase resumes.

Billy Bletcher as Spike Bulldog (In the Early Version)

Jerry tries to run across a tablecloth.

The tablecloth's been pulled all the way!

Tom runs to the other side of the table. 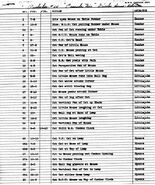 Bulldog tries to chomp Jerry in him.