Not to be confused with See Dr. Jackal and Hide.

Dr. Jekyll and Mr. Mouse is a 1947 one-reel animated cartoon and is the 30th Tom and Jerry short. The cartoon was released on 14 June 1947, and was directed by William Hanna and Joseph Barbera, produced by Fred Quimby and has animation by Ed Barge, Michael Lah, Kenneth Muse, Al Grandmain along with uncredited animation by Pete Burness and Ray Patterson. The episode is a parody of Dr. Jekyll and Mr. Hyde. It was nominated for the Academy Award for Best Short Subject: Cartoons in 1947, but lost to Warner Bros.' Tweetie Pie.

Near a basement window are two empty milk bottles whom the milkman comes and replaces them with new ones. Through the basement window, Tom reaches for one of the bottles and then snatches it, rushing into the living room to pour it in his bowl and drink it but Jerry also wants Tom's milk. Tom makes various attempts to catch Jerry, but when they all fail, the cat dreams up a murderous plot to rid himself of his annoyance.

The next scene shows Tom mixing dangerous chemicals such as moth balls, acid, ammonia, and poison into his milk, upon mixing the deadly elixir, the chemicals cause the spoon to dissolve. After seeing a fly taking a little sip from the bowl before crying in pain and then dropping dead, Tom carefully carries the bowl and places it outside Jerry's hole, confident that his potion works, gleefully watching Jerry about to drink from the bowl.

Seeing the bowl of milk once again, the mouse drinks the milk, causing him to yell in pain and collapse "dead". Just before Tom can celebrate over the "dead" mouse, the full effects of the potion take place: Jerry starts to turn into a super-strong mega muscular version of himself who is now more than able to defend himself against the cat, only one thing is on Jerry's mind: To fight back against Tom! Tom panics and backs off as Jerry advances. He first smashes a book from the telephone desk on Jerry, but the book punches through Jerry, who proceeds to rip the book apart. Tom then tries whacking Jerry with a fire poker, but only leaves imprints of Jerry on it. He then rushes and shuts the door to the living room, but Jerry knocks it over, and Tom rushes to hide into the safe, only for Jerry to drill a hole on the safe's door with his bare fist and pull Tom out. Jerry's seemingly infinite strength allows him to smack Tom against a safe, but the potion's effects wear off and Jerry returns to his normal size.

After realizing he can no longer pull the cat around, he dives away from the cat and into the milk bowl. Tom grabs the mouse out of the bowl as he screams and turns into the super-Jerry a second time, whom now grabs Tom and hurls him by his whiskers before the potion wears off. As Jerry realizes he is normal again he simply ties Tom's whiskers and tries to drink more potion. The feline upends the bowl with his foot before the mouse can drink enough, and the chase continues across the kitchen. Jerry first traps Tom's tail into a waffle maker, making Tom scream in pain and turning it into a waffle. He then hides in the refrigerator, and as Tom opens to look for him, Jerry is revealed to be at the door of the refrigerator, and kicks Tom in, trapping him inside.

Once launching Tom into the kitchen refrigerator, Jerry hurriedly attempts to make more of the concoction himself, with a different formula such as shoe cleaner, more mothballs, a little acid, ammonia, and a drop of red poison (albeit with somewhat inaccurate measurements due to the concoction being rushed by Jerry himself) but before Jerry has a chance to drink it, Tom escapes from the refrigerator covered with food, asparagus out from mouth and steals the milk from Jerry. The mouse tries to run away, but Tom stomps on his tail and forces his enemy to watch as he greedily drinks the potion, thinking that he'd turn into a super-strong mega muscular version of himself. The cat grins evilly at Jerry and as Tom grows to an enormous size, but then an explosion erupts from Tom, resulting in him shrinking to a smaller size than Jerry.

For a second, both of them stare at each other. Then, Jerry realizes much to its delight that Tom is now smaller. Jerry grabs its tail from Tom's foot, causing Tom to lose his balance. Tom, terrified now, tries to run but Jerry holds onto Tom's tail and punches Tom's face. This triggers the cat to shrink more. Jerry then pulls Tom's tail and snaps it. Tom yells in a high-pitched scream and shrinks one last time all the way to the size of a little ant, so Jerry decides to chase ant-sized Tom with a flyswatter until the formula's effects wear off...

The short's original title card (only in black and white).

Original credits (only in black and white).

Original Fred Quimby credit (only in black and white).

Tom poisons the milk with deadly potions and poisonous acids.

Jerry becomes big and muscular after drinking the deadly milk and threatens Tom.

Tom trying to hide in the safe.

Jerry back to normal.

Well well well. What do we have here?

Tom's tail turns into a waffle. 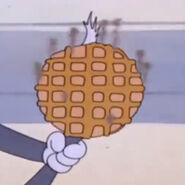