Born and raised in San Jose, California, he and his family moved to Bakersfield. By 1936 he was still living there and was known for his landscape paintings, and in 1939 he married his wife.

He began his career at the Harman-Ising studio which shut down by August 1937, when Fred Quimby poached the studio for staff, including Jack Zander, and Joseph Barbera for his new studio.

Barge worked at MGM as an assistant animator and received his first screen credit as an animator on Innertube Antics (1944) directed by George Gordon. Gordon's unit had just been disbanded the year before, at which point Barge was placed in the William Hanna/Joseph Barbera unit which made the Tom and Jerry cartoons. Barge remained until around 1954-1955.

Although the H-B studio started earlier in 1957, Barge was fairly late to the punch, being recruited in 1965 to work on "The Man Called Flinstone" (1965). He would remain there working on the various cartoons the studio produced until 1982 when he retired.

Ed Barge's style is fluent (second only to Muse in fluency), and he is a big fan of doing "black eye smears" as opposed to the others which used exaggerated eyes and drybrush. He also draws his characters with a cuter, more rounder appearance. Here are some examples of his work; 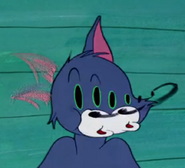 A telltale sign of whether a scene is barge or not is the way he does smears. 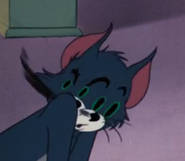 Another example from the mid-late 50s. 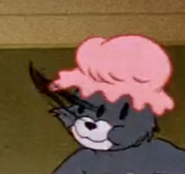 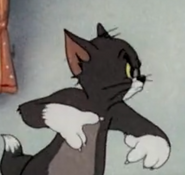 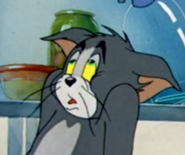 From 1947, his Tom design is more polished from this point onwards. 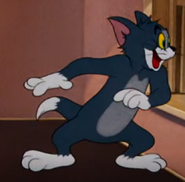 His Tom design from 1948-1951, the ears are a tad sharper but other than that it's just the previous design with extra polish. 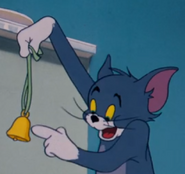 His Tom design from 1952-1954, his design is less detailed now and with the addition of even softer ears. 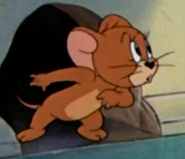 And here is his Jerry from 1945-1947, note the shorter hairs, rounder ears and overall cuter appearance.

His Jerry design from 1948-1950 is very polished, alongside Muse he was known for giving his characters extra detail. 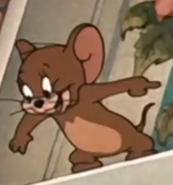 Barge's Jerry design from the early 50s is very polished, also note he was the last to remove Jerry's eyelashes. 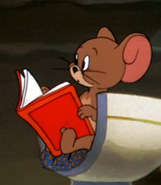 In 1953, Barge finally removed his eyelashes, this is more or less his final design until Barge departed the studio.