Tom and Jerry Wiki
Register
Don't have an account?
Sign In
Advertisement
in: Characters, Female, Ducks,
and 8 more

Fifi is a character that appears in Tom and Jerry and The Tom and Jerry Show (2014). She is Quacker's girlfriend that first appeared in Downhearted Duckling.

Her appearance is similar to Quacker, except she wears a purple hat and hold a purple umbrella, in 2014 series she is lighter color. 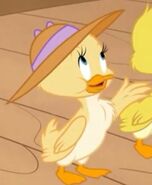