This article is about a Tom & Jerry Kids episode. For the Tom and Jerry short, click here.

Sing Along with Slowpoke

I Dream of Cheezy

"Fraidy Cat" is an episode of Tom & Jerry Kids.

The story begins with Tom playing golf in the house and attacks Jerry. the doorbell rings, which startles Tom as He uses His golf club to push some books covering Jerry's mouse hole. Tom then gets to the door and opens it, only to find out there is another kitten who looks like him, but wearing a yellow cap with a green stripe. Bewildered, the both of them stick out Their tongues at each other, and then sneeze as the both of them wipe each other's face with a handkerchief, Tom slams the door and then opens it once again to find out who it is. The other cat kicks Tom playfully, but then introduces himself as Tim, and claims to be Tom's twin brother. Tim tells Tom about his past history of being a fraidy cat, and tells him he is no longer afraid. Right away, Tim craves for food and without asking Tom's permission, he goes to the refrigerator and throws the food out and onto the counter. As Jerry attempts to grab the cheese, Tim spots Jerry, but panics and runs to a high stool. Jerry, thinking that's Tom, shakes the stool, and then Tim retreats to Tom telling him that that a mouse is in the house. Tom appears and sees Jerry. Jerry in all his bravery, taunts Tom and tries in futility to scare him. Tom then attacks Jerry with a flyswatter and throws him out of the house, and into the birdbath.

Tim then tells Tom about his ordeal with Jerry, but tells him it didn't bother him, and then decides to rest up on the couch. Jerry then goes into the house and acts like a ninja, and lands on Tim's stomach, which wakes him up and causes him to panic and hide in Tom's toy chest, which Jerry locks up. Meanwhile, in the kitchen, Jerry spots Tom using the refrigerator and pulls on his tail, and then makes faces at Tom, but Tom doesn't react. Right away, Tom whacks Jerry with the flyswatter and then Jerry is flung into the birdbath once again. Tim, still in a panic wants to know how the snack was going, so he goes outside for some fresh air. Jerry then raids the table and gulps the sandwich, in which Tom retaliates with a tomato. Jerry then retreats to his mouse hole and flings the tomato into Tom's face, Jerry, however, gets captured. Tim, in an exciting mood sees Tom grabbing Jerry (who now realizes there are two cats) punches Tim in the nose, causing Tim to jump out of control and hang onto the chandelier, and then lands on top of Tom, thus allowing Jerry to escape.

Tom with a chart, teaches Tim on how weak mice are, but Jerry decides to prove wrong the theory of Mice never beating up a cat. As Tim mercilessly searches for Jerry, he runs away to the house's antenna after seeing Jerry growl. As Tom tries to get Tim down the ladder, Tim lands on him as the ladder steps break apart. A while later, as Tom recovers from the injury, Tim says he will not leave the house until he captures Jerry. As Tim tries once again to locate Jerry, he encounters a monstrous version of Jerry, causing him to freak out and tells Tom that he is leaving, and then breaks out through the door. However, it turns out that the monstrous Jerry costume is Tom in disguise, and while the real Jerry encounters his monstrous counterpart, he gets stomped on and attempts to escape as Tom (still in the disguise) chases Jerry outside.

Tom with his brother, Tim 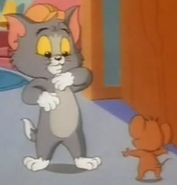