He is best known for the voice of Fred Jones (1969-present) and Scooby-Doo (2002-present) on Scooby-Doo!. He also provided the voices of Tom Cat, Jerry Mouse, Spike Bulldog, and Tyke Bulldog in The Tom & Jerry Comedy Show, Tom and Jerry: The Magic Ring, The Tom and Jerry Show and Tom & Jerry (2021 film)

In 2016, he was honored with an Emmy Award for his lifetime achievement. He has also voiced various characters in The Smurfs, Transformers, and The Garfield Show and many, many more. 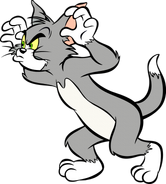 Tom Cat in the Tom and Jerry film

Spike Bulldog in Tom and Jerry: Blast Off to Mars