Joan's often seen either cooking in the kitchen or knitting while sitting in her armchair with Tom keeping her company. George, who's usually seen wearing a suit, hates the monthly bills and complains that they're too expensive, but when he's not complaining about the bills, he's usually sitting in his own armchair or on the sofa reading the newspaper with Spike keeping him company.

Both George and Joan are very kind and polite and seem to love each other very much. In Pet Peeve, George and Joan decided that they keep Jerry as a pet because he's easy to look after and doesn't eat too much and tells Tom and Spike to leave. However, in later episodes with George and Joan, Tom and Spike still happily live with them and Jerry isn't known by the couple and he isn't a pet anymore.

Voice Actors of George and Joan 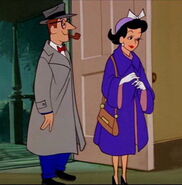 Add a photo to this gallery
Retrieved from "https://tomandjerry.fandom.com/wiki/George_and_Joan?oldid=101687"
Community content is available under CC-BY-SA unless otherwise noted.