Hatch Up Your Troubles

The Cat and the Mermouse
Heavenly Puss is the forty-second Tom and Jerry cartoon, released in 1949.

The cartoon begins with Tom resting by the fireplace as Jerry peeks through his mousehole and runs under the chair then continues on as Tom opens his one eye. Jerry climbs up the table and hides behind the candle and while he was checking the coast is clear, Tom picks up a knife getting ready to strike. Jerry puts his hand to pinch a biscuit when Tom hits his hand with a knife. Jerry sees Tom and ducks down as Tom chops the candle in half and dashes off. Now a typically violent chase begins, Jerry climbs the stairs, and Tom loosens the carpet which is on the stairs, along with a large piano. Tom tries to run away from the piano, but fails when he only runs into a dead end, then ends up being squashed by the piano, which kills him.

The golden escalator of Heaven appears which takes Tom's soul up into the sky to the golden gates of the railroad station where the "Heavenly Express" train is waiting that carries the souls of dead cats to heaven. A few cats are in the queue. The gatekeeper calls out Butch's name who had died in a fight with a bulldog. He lets Butch broad and notices a pair of the dog's teeth on his tail. Frankie who was struck on the head with a flat iron while caterwauling on a backyard fence and Aloysius who got ran over by a steamroller. The gatekeeper lets the two cats broad the train. He calls out Fluff, Muff and Puff, three kittens who were thrown into a river and drowned ("What some people won't do", as the gatekeeper remarked), though the gatekeeper only has enough time to say their names, then they go quickly though the gate to the train. The gatekeeper allows the kittens through as their deaths were untimely.

Tom tries to sneak past the gatekeeper, who catches him and says, "Thomas, just a minute." He is forced to stand in line as the gatekeeper looks through his past life. He is alarmed by this and confronts Tom for the deed. The gatekeeper reveals that because he has persecuted Jerry all his life instead of befriending him, because this is a bad deed he has refused to let Tom broad the train. But, the Heavenly Express doesn't depart for an hour, so Tom is given a "Certificate of forgiveness" for Jerry to sign and if he can get Jerry's signature stating his forgiveness within one hour, he will be allowed to broad, but if he fails to accomplish this, will know that he will be banished to hell where Spike the Bulldog, personified as the devil, awaits. Tom is horrified while the gatekeeper reminds him he only has an hour.

Tom is revived, thinking it was all a dream. However, he realizes it is real when he is holding the certificate of forgiveness that Jerry has to sign. A golden clock appears showing how long Tom has left before the Heavenly Express departs. The ghostly voice of the gatekeeper says "Hurry, Tom! Hurry!" Tom gives a cake saying "To my pal" on the side of the cake. He knocks on the door, Jerry comes out and asks if the cake is for him. Tom nods yes. Jerry digs into the cake, leaving only the candles and crumbs. Tom grabs Jerry out, gives him a pen, and tells him to sign the certificate, but Jerry squirts him with the pen with blue ink! The golden clock appears, showing there is only half an hour left for Jerry to sign the certificate of forgiveness. Tom tries to forge Jerry's signature, but the ghostly voice of the gatekeeper prevents him and reminds him that Jerry must to sign it. He then tries to get Jerry to sign it by bribing him with cheese. Thinking that Tom is tricking him, Jerry angrily rips the certificate up. Frightened and enraged, Tom attempts to smash Jerry, but then, Spike (or the devil) pops in and reminds Tom of the consequence of doing so: "Attaboy, Tom! Hit him and let's go! Come on!" He hears the voice of the bell for the golden clock informing him the Heavenly Express is about to depart without him and realizes he's running out of time. Tom puts all the pieces of the certificate back together and he pleads with Jerry to sign the paper by gesturing the fate that awaits him. He also mimes an apology for how he has treated Jerry. Still skeptical but seeing that Tom is truly sorry, Jerry finally decides to sign the certificate but there is no ink in the pen. Tom shakes the pen and squirts it on the wall and hears the bell of the golden clock meaning time is up. Jerry manages to sign the paper as Tom races up the stairway to heaven, and tries to reach the train, but fails when the stairs disappear like magic until a hole, which leads to hell, appears on the floor.

It leads to hell directly, then he falls through it into the cauldron in hell where Spike is going to eternally torture him, using a pitchfork to heat him in a cauldron while laughing manically. Tom is stuck there forever for his crimes in persecuting Jerry instead of being with his friends in the train to Heaven.

It turns out it was all a nightmare, as a burning piece of wood from the fireplace wakes up Tom and makes him yelp. Tom realizes that he is still alive and is overjoyed since he had a bad dream. He runs over to Jerry and kisses him and hugs him profusely. Utterly perplexed, Jerry shrugs as the cartoon iris out the episode ends. 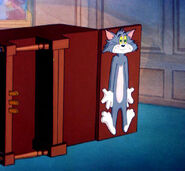 Tom ultimately meets his death by the piano.

Tom on his way to the train.