Jerry and the Lion

Jerry and the Lion

Jerry and the Lion is a 1950 one-reel animated cartoon and is the 50th Tom and Jerry short. It was produced in Technicolor and released to theatres on April 8, 1950 by Metro-Goldwyn Mayer.

Episode starts: Tom is listening to music on the radio, but hears a crash from milk bottle in the kitchen, where he sees Jerry stealing food from the fridge to hole with food conveyor. When Tom tries to stop Jerry by putting his hand on the food conveyor, Jerry squeezes a tomato into Tom's face like an umbrella. Jerry runs toward his mousehole; but when Tom closes the door, the mouse sneaks through his own mousehole door, and squeezes another tomato into the cat's face again. When Tom returns to his chair and radio, an emergency alert then comes and announces:

Tom frantically closes all the windows, puts a couch in front of the door, and grabs a gun and safari hat to defend himself. Tom hides behind a table, while Jerry, who overheard the warning, comes out of the hiding teapot, decides to run away for the sake, and heads into the wrong direction, but screams in fear when he sees a pair of two blue angry eyes hiding in the dark from the lion, who is furious of seeing him coming the wrong way. He tries to run away, but, before he can break away, or even have some of the good he stole from the refrigerator, and also try to do anything too, fails when the runaway lion grabs him and befriends Jerry, showing he is anything but ferocious, and turns out to be a fairly tame lion. He tells Jerry, "Don't give me away, pal. Don't let 'em catch me. If they take me back to that circus, I'll go crazy. I can't stand that corny music, all that crackle, crackle, crackle, of them popcorn bags. Say you'll help me get back to the jungle, please?" with a big toothy but friendly smile. Jerry nods as the lion continues, "Gee, thanks, pal! Thanks! There's just one more little thing. I'm hungry." while pointing at his wide open mouth.

Jerry and the lion then sneak over the kitchen. Jerry sneaks a large ham for the lion and are spotted by Tom. Tom stops Jerry with his rifle and takes the ham away from him. Tom then catches Jerry by his tail and Tom holds the ham behind him. The lion, who is hiding behind a curtain, eats the ham in one bite. Tom then goes to take a bite into the ham, but sees there's nothing there, hears crunching noises from behind the curtain, then gets scared and points the rifle at the curtain. Jerry then raises the gun and it goes off, hitting the ceiling. Jerry then starts acting if he had been shot until he hits the ground. Tom sees this and runs away. Jerry and the lion run away in the other direction. Tom returns with a first aid kit, but finds Jerry nowhere to be found.

Tom then looks for the lion, but finds Jerry in another room, and doesn't notice that the lion is perched on top of the lamp. Tom points the rifle in Jerry's face and grabs Jerry, who starts to throw punches. Amused, Tom sticks out his chin as if to say, "Go ahead. Hit me with your best shot." Jerry looks up at the lion, who obligingly raises his paw and smacks Tom right in the kisser, sending him flying halfway across the room to crash right through the chimney stack, The fireplace mantle converts into a slot machine, which turns up three lemons, before Tom falls into the fireplace and has bricks land on his head. Jerry and the lion then run and hide in an umbrella stand. Tom grabs the umbrella and opens it, but quickly learns why it is bad luck to do so when the lion (who was somehow hiding inside it) falls out and squashes him flat.

They run off, and the lion, presumably having a plan in mind, then suggests that he and Jerry hide in the safe closet, which the mouse proceeds to do so. Tom then closes the door on the closet, gives an evil laugh whilst slipping inside it and locks the door from the outside. Almost immediately sounds of battle begin to emit from behind the locked door as Tom is viciously beaten by the lion in the dark while screaming in pain and trying frantically to escape before the door is ripped off it's hinges and flung clear across the room with Tom against it.

An angry Jerry continues to menace Tom, who (believing that the mouse was responsible for his savage beating) screams in terror, moves the door and rams straight through the wall as he makes his escape. The lion appears soon after, and the two shake hands as an exchange of gratitude.

Jerry is then shown pushing the lion into an empty lifeboat from the S.S. Africa The boat gives a toot and sails away when the lion bids Jerry goodbye as they both cry over their premature separation while the ship sails out of sight. Despite this, Jerry remains content with his efforts in helping the lion.

Tom enjoy relaxing & listening to the music on the radio before the news comes on.

Jerry stealing foods from the Fridge.

Lion wants Jerry to help him.

Getting to know each other.

"I'm hungry" (as he points to his open mouth)

Tiptoeing to the kitchen

Big mouth! (He eats the ham) 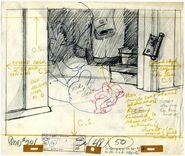 Layout Drawing. (when after Jerry scares away Tom)

Tom aneaks at the closet door with an evil laugh.

The Lion above the duo.

Jerry helps send the Lion to Africa with SS AFRICA.

The SS AFRICA sailed away.