Love Me, Love My Mouse

Love Me, Love My Mouse

Love Me, Love My Mouse is a 1966 Tom and Jerry cartoon directed and produced by Chuck Jones and co-directed by Ben Washam. The title Love Me, Love My Mouse is a play-on-words of the phrase "Love me, love my dog." Unlike most other cartoons, this one shows Jerry in a deliberately malicious light, with Jerry frequently framing Tom so that Tom remains in trouble for more than the half of the episode, including the verge of breaking Tom's relationship with his girlfriend.

Tom is in love with Toodles Galore and flies to her house, carrying Jerry in a ring box. Having reached the destination point, Tom presents Jerry to his love interest. Jerry then pretends to be powerless and cuddles up to Toodles, who instantly sympathises with him, now taking sides with Jerry, as it was.

Jerry then makes efforts to drive a wedge into Tom's and Toodles's relationship by working his way into Tom's mouth, composed of tickling Tom's foot, hitting it with a mallet and playing a lullaby from a gramophone, leading to Toodles to come to Jerry's "rescue". Realizing Jerry is milking the sympathy for all its worth, Tom grabs the conniving rodent and tries to do away with him once and for all. Unfortunately for Tom, Toodles storms in and rescues Jerry. Tom then by accident releases the rope of the concrete block that he was using to defeat Jerry, the block soon comes crashing down on Tom.

A bandaged Tom hobbles to the dinner table to find his love interest putting baby powder on Jerry's butt and repeatedly kisses him. Toodles soon realizes something else when kissing Jerry: aside from being cute, Jerry is also quite tasty. She has a change of heart, and attempts to eat Jerry, taking sides with Tom. At the sight of this, Tom cheers in joy. When Toodles is about to eat Jerry, she sees that the mouse had escaped, and chases him with her utensils. Jerry hops out the door, right before Toodles pursues him, then Tom limps to outside following her. 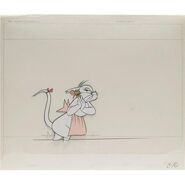 Another animation cell from the cartoon.