Tom and Jerry Wiki
Register
Don't have an account?
Sign In
Advertisement
in: Characters, Cats, Recurring characters,
and 14 more

Not to be confused with Meathead Dog.

Meathead, also known as Frankie in Heavenly Puss, is a brown, mangy, generally dull-witted cat who first appeared in the Tom and Jerry 1943 short, Sufferin' Cats!, as Tom's rival. Meathead later reappeared in Baby Puss (in which he serves as one of three minor foes and a recurring foe) and additional shorts as one of Tom's alley cat friends or foes.

Not much is known about Meathead's personality, thought he is more or less a stubborn, and foolish alley cat. He is initially Tom's rival, but in comparison, he is less smarter than Tom, and doesn't have a deep thinking like Thomas. He is the least intelligent cat among all the cats that have appeared in Tom and Jerry.

In The Tom and Jerry Show (2014), Meathead is portray as mildly goofy, usually friendly and oblivious due to him being "a meathead". but is fair, who's is often not the brightest, quite oblivious, in his own world, but sometimes lucky yet good-natured and cooperative.

Meathead Cat has brown fur with white paws and wears a red toupee (which is sometimes the same color as the rest of his fur). He also has his tail tied in a bandage in his first two appearances. In Scat Cats, his final golden age appearance, Meathead is gray instead of brown.

In Tom and Jerry Tales, he is strangely portrayed as being orange similar to Lightning Cat's fur color and having a red nose and, in two of the episodes he appears in, a bushy tail.

Meathead with a flowerpot. 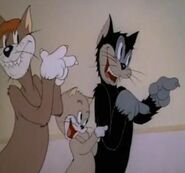 Meathead with his friends while they bully Tom.

Meathead and his friends looking.

Meathead with Toodles, Butch and Dollface in Frenemies.