Not be confused with Catfish Follies, an episode from Tom and Jerry Tales.

Mice Follies is the 85th entry of the classic series. It was created in 1954, directed by William Hanna and Joseph Barbera and produced by Fred Quimby with music by Scott Bradley, mainly incorporating Tchaikovsky's Sleeping Beauty Waltz. The animation was done by Kenneth Muse, Ed Barge, Irven Spence, and Ray Patterson with backgrounds by Robert Gentle. This entry was released by Metro-Goldwyn Mayer on September 4, 1954.

Jerry and Nibbles flood the kitchen and freeze the water, turning the room into a skating rink. The two mice go about their own business, skating and sliding across the frozen floor - until Tom is woken up. He pursues the two mice, but is not as mobile on ice as he thought. As he skids across the "rink", he crashes into a closet and comes across a pair of ice skates. Equally matching the skating prowess of the mice, the chase resumes as Tom crashes into, bangs into, stumbles across and dodges many kitchen obstacles, including an ironing board, a door and some stools, before sliding up a table plank-turned-ramp made by the mice and falling down into the cellar.

Tom emerges from the cellar and just as he is about to catch Jerry after banging the shovel in his hand on the mouse's head (leaving a dent shaped like Jerry blowing a raspberry), Nibbles wisely defrosts the ice, causing Tom to slip over on the watery floor and having to adjust to the changes. Using a seltzer water dispenser, Tom scares Jerry into climbing up a shelf, which leaves the mouse with nowhere else to run and hide. As the cat was ready to spray again, Nibbles sets the freezer to 'Quick Freeze', re-freezing the floor, with Tom standing on it; just as he sprays the seltzer water, he becomes nothing more but an icy display while the water makes a bridge for Jerry to skate across. Jerry gives Tom a satisfied look as the cat is now motionless. Jerry and Nibbles resume their ice dancing, skating around the frozen cat who can do nothing but move his eyes around and follow the mice as they skate across the floor. 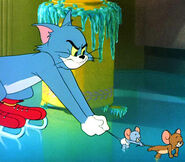 Tom, with the aid of some skates, pursues Jerry and Nibbles.

Jerry and Nibbles dance around a frozen Tom.

Different version of the 1954 blue Tom & Jerry title as seen in the opening titles to the cartoon.