Tom and Jerry Wiki
Register
Don't have an account?
Sign In
Advertisement
in: Tom and Jerry: Back to Oz Characters, One-time characters, Mice,
and 2 more

The Mouse Queen appears in the Tom and Jerry film "Tom and Jerry: Back to Oz". She is based on the character in L. Frank Baum's book "The Wonderful Wizard of Oz". She is voiced by Amy Pemberton, who is also Dorothy Gale's second singing voice provider.

Role in the film

The Mouse Queen is first seen when Jerry and Tin Man are rescued by her mice servants. Jerry fell in love with her at first sight. Mouse Queen is friends with Tin Man, and she has shown signs of affection for Jerry. When Tin Man introduced her to Jerry, he bowed to her to show his respect, and she remarked that Jerry has very good manners. When Mouse Queen ordered her mice to get her coach to move Tin Man, who was rusted, she asked Jerry to join her. During the rescue at the Emerald City, Mouse Queen and her mice got Glinda's wand and rescued her while Jitterbug was taking over Ruggedo, making him dance. Before Tom, Jerry, Dorothy, and Toto returned to Kansas, Mouse Queen kissed Jerry. 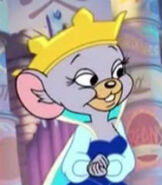