Tom and Jerry Wiki
Register
Don't have an account?
Sign In
Advertisement
in: Characters, Minor characters, Mice,
and 11 more

Muscles (also known as Muscles Mouse or Cousin Muscles) is Jerry's super-strong cousin. His first appearance is in "Jerry's Cousin" and he is a tough mouse and no cats, not even Tom could defeat him, even the Dirty Work Inc. Bully Cats were no match to him either. He is the strongest guy on the series. A mouse who is similar to Muscles named Freddy appears in the direct-to-video film Tom and Jerry: The Magic Ring, but it was not Muscles. He dislikes fried bananas, and people who like to eat seeds. He is voiced by Paul Frees. He also appears in The Tom and Jerry Show (2014) and Tom and Jerry in New York, voiced by Stephen Stanton.

Muscles is Jerry's super-strong, cat-hating cousin; in his debut, it is implied that he is older than Jerry (by his referral to him as his "little cousin").

He is the first cousin to be introduced to Jerry, and is a distant relative to Jerry's other cousin, Merlin Mouse; however, Muscles and Merlin are polar opposites in terms of behavior: Muscles is hard-lined, and very prone to fighting, as well as quick to anger; this contradicts to not just Merlin but even Jerry as well, with both prefer non-lethal methods to handling cats. Jerry therefore has a more complicated relationship with Muscles; nevertheless, Jerry has no problem with calling Muscles in for help when he needs him most.

Despite his rough demeanor, however, Muscles DOES possess a bit of a softer side, as in his debut episode, he shared crackers with Jerry, and space on Tom's bed, with a smile on his face; likewise, when Jerry first reached out to him for help, he appeared to be outraged and quickly went to his cousin's aid.

He wears a green bowler hat and a yellow-black shirt, his facial expression is always solemn. He's arguably the strongest character in the series. His look resembles his cousin Jerry, but there are some differences. Muscles does not have eyelashes like Jerry does, and his whiskers are a bit curvier than Jerry's.

The episode opens with a cat slamming into a signpost in an alleyway. As the camera moves right, we see more and more Cats getting thrown or just being unconscious. Finally, we see a pile of unconscious cats and Muscles beating up yet another cat.

He stops when he heard a whistle, and we see a letter being placed in his mailbox. Muscles heads over and reads the letter, which came from Jerry. Jerry asks Muscles for help, stating that he's having trouble with Tom. Muscles is quick to enter his mousehole, before exiting with a red suitcase.

Muscles makes his way towards Jerry's mousehole. The surviving cats in the alleyway, terrified of any confrontation with Muscles, run away as soon as they see him coming, but one of them panics and digs his own grave as Jerry's cousin walks on by. We then see the extent of the trouble that Jerry is experiencing with Tom - the cat is throwing stick after stick of firecrackers into Jerry's mousehole. Muscles arrives just as a stick of dynamite is thrown into the hole. Confidently picking up the dynamite, Muscles marches out of the hole and promptly opens up Tom's mouth, places the dynamite inside, and holds Tom's mouth closed, until the dynamite explodes, causing smoke to emerge from the cat's ears. Tom grabs Muscles, but he easily throws the cat off, grabs him by the fur on his chest, and gives him a stern warning of things to come: "Listen, pussycat, don't let me catch ya pickin' on my little cousin while I'm around. Ya understand? Now, beat it." Muscles throws Tom at a nearby wall, and upon impact, Tom slides down into a vase. Muscles spits at the vase and it cracks, revealing Tom who has taken on the shape of the vase.

Tom undertakes some weight training, and believing that he is more than a match for Muscles, begins another confrontation, pounding Muscles' hat down over his eyes. However, Muscles blows on his thumb, causing his fist to expand to gigantic proportions, and punches Tom square in the face with great gusto. The force sends Tom crashing into a wall, and a cuckoo clock to fall on his head. The cuckoo pops out of Tom's mouth. Later, Jerry and Muscles are lying on Tom's bed. The camera tilts up towards the ceiling, where Tom is sawing a hole from the attic. Through the hole, he drops a bowling ball. "Relax, cousin. Nothing is going to happen," reassures Muscles, moments before he is hit by the bowling ball and disappears through the floor. Tom chases after Jerry, but Muscles catches up with him and bowls the ball towards him. Tom cannot get away quickly enough and upon being hit by the bowling ball is turned into ten pins. Tom retaliates by sticking a double-barrel shotgun in Muscles' face, but the mouse simply blows into both barrels of the gun, backfiring the cartridges into each of Tom's eyes sticking fast to them. Muscles walks up behind Tom's head with a hammer, and hits Tom in the back of the head, setting off the bullets.

We next see Tom wearing dark glasses, dialing the telephone. He calls Dirty Works Inc. up, speaks to the boss and hires him and two other cat thugs to 'take care' of Muscles. However, when the cats arrive, they only hit Muscles once off-screen, but are not strong enough to defeat Muscles as he quickly recovers and hits them harder again off-screen, and eventually Muscles scoops them up with a dustpan and brush and throws them out of the house. Tom is, by now, so intimidated, that he has no choice, but to grovel at Muscles' feet. At the end of the cartoon, Muscles gives Jerry an identical suit, telling him that all he has to do is whistle. Jerry puts on the suit, steps out of his hole, and whistles. Tom, believing that Jerry is Muscles, continually bows down to Jerry, kissing his feet and Jerry grins at the camera.

Muscles reading Jerry's letter.
"Dear Cousin Muscles, Am having serious trouble with Tom, Need your help at once Jerry" 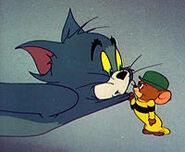 "Listen, pussycat! Don't let me catch you picking on my little cousin while I'm around. You understand? Now beat it!"

All you have to do is whistle.