Beach Bully Bingo
"Octo Suave" is the twenty-eighth episode of Tom and Jerry Tales directed by Neal Sternecky, written by Richard Pursel and storyboard by Kevin Frank and Neal Sternecky.

Tom and Jerry are in a fishing boat. Jerry has become Tom's slave, and is working hard rowing the boat, while Tom relaxes. Tom orders Jerry to drop the anchor, and they both get ready to dive spearfish. Tom tries to hit Jerry with the spear, but Jerry tries to escape by jumping into the ocean, and Tom chases him. Tom tries to hunt some fish, including a pufferfish and a lobster. However, Jerry jumps onto a seahorse to stop him, by scaring the pufferfish (and it inflates rapidly). Tom attempts to catch the seahorse with a lasso made out of seaweed, but the seahorse is too strong for him and drags him along the seabed, hitting the coral and many seaweeds, which makes him look like a mermaid (The fish tail made from the lasso, 2 starfish are the bra and a pink jellyfish is the hair). Later, he encounters a very amorous octopus gentleman named Morizzio, who mistakes Tom for a lady. Morizzio wants to date Tom but Tom slaps Morizzio's face. Morizzio finds Tom in a clam and Tom swims, going to a cave and he sees Morizzio. Tom starts to run again. He sees a treasure chest and opens it to see a duck, a goat, a pig, a dog and a mole. Tom tells them to get out of the chest, and Tom goes in the chest and the chest gets locked. Jerry calls Morizzio, and Morizzio turns one of his tentacles into a key and puts the key in the keyhole and opens the chest. Morizzio wants to kiss Tom but Tom puts an electric eel into his mouth makes Morizzio get injured. Later, Morizzio wants Tom to takes his ring he made from the pearl, and Jerry puts a jellyfish on Tom's head to accept Morizzio's proposal but they end up getting lost at sea. Later, Jerry meets a fish who looks like him and loves him. He ends up trying to escape the fish like Tom trying to escape Morizzio. 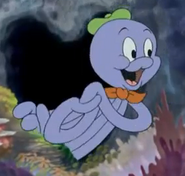