Tom and Jerry Wiki
Register
Don't have an account?
Sign In
Advertisement
in: Books, Merchandise, Printed media,
and 3 more

Jerry and Tuffy are planning a big party, but Tom has a plan of his own: catching the two mice! Tom soon finds out that crashing their party won’t be as easy as he thought, and that Jerry and Tuffy have a special surprise waiting just for him! 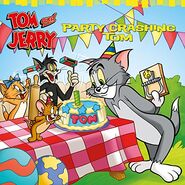