Pecos Pest is the 96th one-reel animated Tom and Jerry short, created in 1955 directed by William Hanna and Joseph Barbera scored by Scott Bradley and released in theaters on November 11, 1955 by Metro Goldwyn Mayer.

Jerry receives a telegram from his Uncle Pecos, and soon Uncle Pecos arrives.

DEAR NEPHEW: Me and my guitar on way to big city for television debut - STOP

Will spend night with you.

The mustached mouse (who stutters in a fashion similar to Porky Pig) gives Jerry a performance on his guitar, playing his new song, "Crambone" (his variation of the song "Frog Went A-Courting"), but his guitar string breaks.

Uncle Pecos asks Jerry if he has a guitar string ("Got a guitar string on ya, n-n-neph-nephew?"), but Jerry shakes his head negatively. Pecos pokes his head out and spots a sleeping Tom, with whiskers that he can use to fix his guitar. He then walks up and plucks a whisker off the cat's head, startling him awake and out of sleep. A shocked Jerry then comes to the rescue just in the nick of time, and quickly carries his reckless uncle away from Tom to his mousehole, all the while Pecos plays on his guitar with Tom in hot-pursuit. Jerry escapes into his mousehole, but accidentally bangs his uncle's head on the wall just above the mousehole while doing so. Jerry quickly drags Uncle Pecos inside before Tom can get him. Uncle Pecos then thanks the cat for his "service" and Tom is confused. Tom then heads for the bathroom to look in the mirror when Pecos again strolls up to the cat and plucks a second whisker out from him after the first one snaps. Pecos plays more of his song until the whisker breaks. Tom, not wanting to be a cat without whiskers, flees in panic. He hides near a door and Pecos opens the door, saying ("Gotta have another whisker, n-n-neph-nephew!") such that it turns back and hits Tom very hard, resulting in the door to break into pieces. Tom becomes noticeable when the door broke into pieces. Pecos soon finds him, and tries to reason with the cat that he needs one of his whiskers to fix his guitar and also asking him to stay still, but Tom is intransigent in protecting his whiskers and tries to keep Jerry's uncle at bay. Pecos grabs a third whisker from Tom Cat despite Tom's best efforts of self-defence, but it snaps upon being tuned. Tom frantically looks for somewhere to hide as Pecos searches for him, and Pecos soon plucks off Tom's fourth whisker, saying "Don't try to stop me, nephew!". Tom dashes in panic into a nearby closet and slams the door shut. Pecos then invites Jerry out to listen to his encore. Tom then steps outside of the closet and enjoys the music Pecos generates until the snap of a string is heard. Tom shrieks and retreats back inside the closet again, but Pecos attacks the door with an axe and saying that Tom knows that Pecos cannot perform without a guitar string ("You know darn well that I won't LEAVE without a guitar string!"), Tom finally surrenders with a white flag and then plucks his fifth whisker for Pecos as a sacrifice to keep him away.

Fortunately, Pecos has left for his performance. On the next day, Tom and Jerry watch his performance in their living room on TV. Pecos starts his performance, but while he is playing the guitar, the guitar's string snaps again. A laughing Tom ended up aghast as he comically reaches out of the television screen, and pulls out Tom's last whisker as Pecos gets to the finale of his performance. 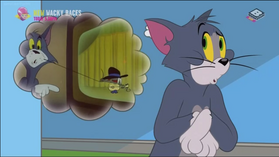