Tom and Jerry Wiki
Register
Don't have an account?
Sign In
Advertisement
in: Characters, Females, Cats,
and 6 more

Persia is a female Persian cat that appears in Gene Deitch-era Tom and Jerry in Calypso Cat. She is Tom's love interest during the era.

When Tom first met this female cat She doesn't notice that Jerry was causing trouble for her and Tom. She has a female owner with her coming in the cruise.

Persia is a short, white Persian Female cat with blue ears with a pink bow in her neck, and a furry tail.

She does gets interested with Tom when the two first met. Tom's tries to convince her that he the right man for her throughout the episode Jerry keeps sabotaging their relationship, which makes it hard for them. She is shown to be patient and forgiving, but also defensive. 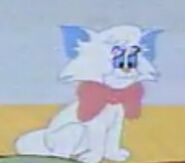