Tom and Jerry Wiki
Register
Don't have an account?
Sign In
Advertisement
in: Animators, Deceased People, Deceased,
and 2 more

Burness was born on June 16, 1904 in Los Angeles, and studied at the University of Southern California, and the Chouinard Art Insitute. He was working as a commercial artist, and by 1931, started his career in animating. He joined the short lived Romer Grey Studio, when that studio shuttered its doors he moved to Ted Eshbaugh Studios and left about a year later to join the Van Beuren Corporation, where he worked on the "Little King" series. In 1934, he was fired from the studio alongside 49 others, afterwards he moved to the Harman-Ising studio.

One of the star animators at Harman Ising, he worked on the Happy Harmonies series for MGM, after the studio went bankrupt in 1938 however, he joined the MGM animation department. He was assigned Rudolf Ising's (though he alternated between his and the HB unit) unit until 1942 when it dissolved, afterwards he would join the Hanna-Barbera unit to work on Tom and Jerry.

Beginning with "Puss n' Toots", he would be a main animator for the series from 1942-1946 (though he took a short break in 1945 to work at Lantz), in his later shorts he would go uncredited. He animated a lot of the weird, surreal scenes. Around 1946 he left MGM to work at John Sutherland Productions.

Beginning in 1946, and ending that same year, he joined John Sutherland Productions and worked on a few stop-motion shorts, like "Daffy Ditties", and "The Traitor Within". Shortly after those were produced he left the studio to work at Warner Bros. After leaving WB a second time in 1947-1948, he joined the studio again and worked on industrial films distributed by MGM. After leaving UPA in 1958, he again went to work for John Sutherland, this time only for a few years. As he would work at Jay Ward Productions (which he would freelance for at times) next.

Burness was hired at WB later on in 1946, animating for Chuck Jones, (whom he previously worked with in the 30s for Ub Iwerks) he worked on a one Jones short, "Haredevil Hare". After that short, he would move to both Friz Freleng's and Rob McKimson's units, he would settle in the McKimson unit before leaving to again work at John Sutherland.

Starting off as an animator on one short, "The Miner's Daughter" he immediately set his eyes on being a director, and he got the chance to direct the third Mister Magoo short "Trouble Indemnity", afterwards he would become the main director for the series, two of the shorts he directed would go on to win an Oscar. He remained at UPA until 1958.

The last studio he would work at would be Jay Ward's Studio, where he would direct the Dudley Do Right segments for "The Bullwinkle Show". One year later, he would become vice president of the commercial department, he would later be known for his work on commercials for Cap'n Crunch, and Quaker Oats. He would remain at Jay Ward until 1969, when he passed away from cancer.

His animation on Tom and Jerry is known for being very fast, and pose-to-pose. He was also the last animator to draw Tom with no discernible chest bumps. Here are some examples of his designs;

The first scene Burness does in the series, here we see a staple of his Tom design, spiky, scruffy hair (but not like Surry's)

The next short he animates on, features a more polished Tom design. the scruffy, rough fur is a lot more pronounced here. 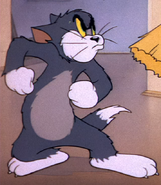 Fast forward to 1943, his Tom doesn't really look much different, aside from the eyes being made bigger. 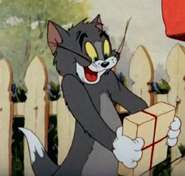 Around 1944, his Tom changes, this time he has the same bipedal design that all the other animators adopted by 1944. His Tom has even more sharper hair now, and it stretches out longer as well. 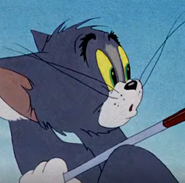 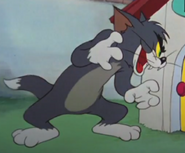 In 1946, his Tom design gets even sharper and longer hair, that's the only difference. 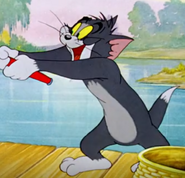 Burness's final design for Tom is just a more polished version of the last design.

The first version of his Jerry is fairly chubby, with heart shaped lobes for the ears. 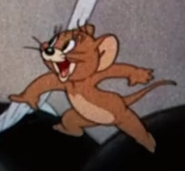 Fast forward to a later 1942 short, his Jerry is a lot slimmer now, and still retains the heart shaped lobes. 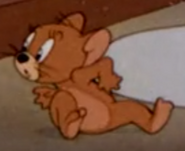 His 1943 Jerry is largely the same, except a slight amount of fat added. 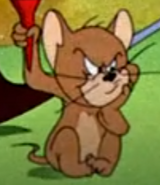 His 1945 Jerry design is slightly chubbier., and Burness around this time does eyes similar to that of Irv Spence. 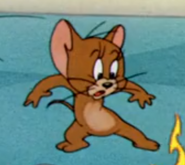 His final Jerry design is a weird amalgamation of all the other designs thus far, although he is notably skinnier now.