Tom and Jerry Wiki
Register
Don't have an account?
Sign In
Advertisement
in: Characters, Cats, Males,
and 7 more

Tom and Jerry in Mouse Party

Pops is a minor character appearing in one Tom and Jerry short Life with Tom. He made a few appearances in Tom and Jerry media such as Tom and Jerry in Mouse Party, as one of Tom's many party guests and Tom and Jerry: A Nutcracker Tale as part of King Cat's Army.

Nothing much is known about Pop's personality, though he is shown to be perfectly willing on helping Tom hinder Jerry's progress on rescuing the orphan mice that he has to take care of in his video game appearance.

Pops is an light blue cat alley cat with blue fur with white paws with a white face. 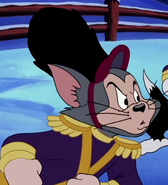