Tom and Jerry Wiki
Register
Don't have an account?
Sign In
Advertisement
in: Characters, Dogs, Males,
and 5 more

Puggsy is a dog who lost his home when his owners moved and got accidentally left behind two years ago. He only appeared in Tom and Jerry: The Movie. He was voiced by the late Ed Gilbert.

Puggsy is a large brown dog with darker ears and eyebrows and eyes. He wears a blue hat, a blue shirt and a purple vest. Around his neck is a lilac scarf.

Puggsy is a cheery animal. It is shown he praises life, as, despite not having a proper home, he still lives happily with Frankie DaFlea, his best friend. Together, they sing "Friends To The End". And he is also known as polite, understanding, gentlemanly, good-tempered, selfless, rational, protective, unswerving, gracious, gregarious, social and funny. Also, Puggsy is cat friendly and tolerance, he have no intention of chasing, beating up and scaring Tom. He believes everybody from species that are natural enemies can be friends, even the best of friends.

Puggsy was first seen in the alley meeting Tom and Jerry who were abandoned by their owner and their house being banned and destroyed by an old fashioned wrecking ball. He introduces himself to them and to Frankie DaFlea. He teaches them how to be friends and sing together "Friends To The End". After finishing singing the song, he decides to give Tom and Jerry to eat, but he and Frankie are captured by the Straycatchers led by Dr. Applecheek and brings them to his house. Shortly after he and Frankie are captured, Tom was confronted by a group of mean alley cats, until Jerry saves him.

Puggsy was not seen afterwards until he and Frankie appear near the end of the film riding on a train seeing Tom and Jerry in the newspaper. He says that Tom and Jerry saved Robyn and Figg, Lickboot and Ferdinand being arrested by Robyn's father for their crimes and planting a one million dollar bounty reward on Robyn. He was impressed that Tom and Jerry are getting along after all. However, unknown to him, Tom reverted back to where he was and had forgotten what he told him earlier and he and Jerry run happily around the house.

Despite the fact that Puggsy's existence in Tom and Jerry's first movie appears to be nice to the reformed duo for that film, the character himself is widely panned by a wide part of the fandom - mainly due to him getting Tom and Jerry to become friends as he gets them to speak (considering him taking away the duo's original personas), thus making Puggsy one of the most unpopular Tom and Jerry characters. As a result, the Tom and Jerry filmography, including the classic shorts from 1940-1967, still places Tom and Jerry's silences as their trademarks, thus explicitly dismissing him from the series. 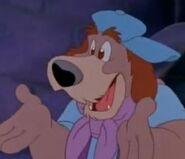 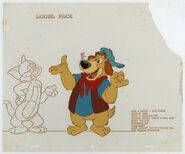