Quiet Please! is a 1945 American one-reel animated cartoon and is the 22nd Tom and Jerry short, which won the 1945 Academy Award for Best Short Subject: Cartoons, making it the third consecutive win the award from the series. It was produced by Fred Quimby and directed by William Hanna and Joseph Barbera, with music by Scott Bradley. The cartoon was animated by Kenneth Muse, Ray Patterson, Irven Spence, and Ed Barge. The cartoon is notable for featuring a speaking Tom, a decided rarity throughout the original series. In this film, Tom says to Jerry: "One custard pie?! Let me have it!"

Tom's enemy, Spike is trying to take a nap. However, he is woken by Tom chasing Jerry with a frying pan, and he gets hit three times in the process. Annoyed, Spike tries to go back to sleep, but is awoken again by the cat's use of a shotgun. Tom eventually discounts the gun, which ends up falling onto Spike's head. The canine buries his head in his pillow, but is woken a third time by several blows to the head via an axe. However, Tom is trying to smack Jerry with the back part of the axe, but Jerry dodges his swings and Tom misses and hits Spike with the axe three times. After Tom runs after Jerry, Spike then finally gets fed up, grabs Tom, and viciously warns him that if he hears one more sound, he will skin him alive, regardless of who made the noise. The screen then pans over to Jerry, who nods with a grin on his face, obviously planning to make life difficult for Tom. Spike, noting that Tom gets the message, throws the feline across the room onto a sofa.

The cat sees the dog settle down to sleep and sighs with relief until he hears Jerry whisper at him and unveils a crude drawing of the cat, provoking the chase. Tom zooms into the next room, but this ends abruptly when Jerry threatens to create noise by bashing a spoon and frying pan together by Spike's ears. Seeing another chance to play around, Jerry pokes and whacks the cat with the spoon, and Tom goes to attack him until Jerry renews the threat. Therefore, Tom walks away, turns the corner, and grabs the utensils from Jerry from behind him. The mouse, seeing his threat has dissipated, escapes and grabs a lamp cord for Tom to trip on. The cat chases the mouse and soon trips on the cord, headed for a table of breakable wine glasses. Luckily, in midair, he manages to push the table out of the way and replace it with a pillow.

Relief is ephemeral as Tom spots Jerry, getting ready to fire a large shotgun, which would make enough noise to wake the dog up, but Tom sticks his fingers in the gun barrels before Jerry can fire. As he examines his throbbing fingers, Jerry tries to push a grandfather clock to the floor. Tom can do nothing but stick his fingers in Spike's ears and hope the dog does not hear the loud crashing, which he doesn't.

After this, Jerry begins to drop lightbulbs off the mantelpiece. Tom amazingly manages to catch them all with all four limbs and his mouth, but Jerry plugs his tail into the light socket, lighting the cat up as if he were a set of Christmas decorations. Jerry then pushes a roller skate under Tom's foot, and sends him straight into Spike. The impact wakes the dog up, as do the subsequent explosions of all the bulbs.

Tom manages to send the dog back to sleep by rocking him and singing him Rock-a-By-Baby and, after putting him down, a twisted version of Brahm's Lullaby ("…close your big bloodshot eyes...you're a dope, and you're a lug, and I hope you don't wake up…") while pouring an entire bottle of "Knock-Out Drops" into Spike's mouth (and nose) so that Spike will be asleep a long time and out cold. As Tom finishes the song, he lifts Spike's eyelid to reveal "OUT COLD". At this point, Jerry noisily bangs a drum, with no effect, even at close range to the dog. To demonstrate the power of the Knock-Out Drops, Tom repeatedly imitates numerous percussion instruments on the KO'ed Spike, plops himself on top of the dog, and shows the mouse the bottle of Knock-Out Drops. This causes Jerry's mouth to drop and himself to instantly become "depressed". Jerry, in the kitchen, writes his last will: My last will - to Tom, my favorite cat I leave my sole earthly possession - ONE CUSTARD PIE. Signed: Jerry. Tom reads it and answers: One custard pie?! Let me have it!, and Jerry throws it into his face.

The chase resumes in full force until Tom stops in horror, as the dog is snarling. However, after a few seconds alive, the cat pulls up Spike's chin to reveal it's Jerry making the noise and moving the dog's chin. When the mouse realizes he's licked, he continues to imitate a dog by barking like one then bites Tom right on the nose.

Tom takes a short break to watch Jerry attempt to wake Spike up. He yells "Yo!" in his ear, nudges his back, and stabs him in the rear with a pin. However, nothing works, as the eyelid reveals that Spike is "STILL OUT COLD". No sooner does he see this than Tom swings a hammer at him and the mouse has to flee. He stops the cat next to a chair and pulls a larger hammer from underneath it. Gracious, Tom hands the mouse the smaller hammer and prepares to flatten Jerry with the big one, but gets his foot smashed by Jerry.

Tom gasps when he sees Jerry placing a huge stick of dynamite underneath Spike. As Tom attempts to pull it out from underneath Spike, the knock-out drops wear off and Spike awakens and growls at him. Tom smiles, slides the explosive device completely under Spike, and escapes. Before Spike can react, the dynamite explodes. A battered Spike reveals his anchor tattoo on his arm, runs to Tom and skins him. Because of the mass confusion and disturbance that Jerry really caused to Spike, Tom, now having bruises, bandaged and blind, ends up having to rock Spike in a cradle for him to sleep. Jerry, Spike's real disturber is also sleeping in the cradle and hangs a "Do Not Disturb" sign from it. 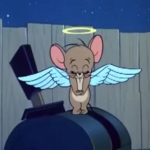