Santa Claus is a traditional holiday figure representing Christmas good cheer and gift-giving, who is the best known (at least in modern times) mascot of Christmas, developed in the United States as an amalgam of Saint Nicholas and various other seasonal folk heroes, with many aspects provided by the classic poem A Visit from St. Nicholas. He is seen the title card in The Night Before Christmas, He physically first appeared in The Tom and Jerry Comedy Show's episode Snowbrawl.

Santa makes a brief cameo in The Tom and Jerry Comedy Show episode Snowbrawl seen flying in sleigh with his reindeers as Jerry rides in the sleigh with him.

In Tom and Jerry Tales episdoes Ho Ho Horrors is where Santa appears as an orament, and only makes his catchphrase "Ho ho ho".

In The Plight Before Christmas, This is Santa's non-minor role, as he was turns into a cookie after Tom accidnetly turn into him to one, Beatie did attempt to eat him, later when Tom and Jerry learns the true meaning of christmas, Santa is turned back to normal self as he gives Tom and Jerry gifts as he departs back in the chimney. 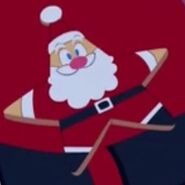