Saturday Evening Puss is the 48th of Tom and Jerry shorts. It was directed by William Hanna and Joseph Barbera who created the cat and mouse duo ten years earlier. The cartoon was produced by Fred Quimby, scored by Scott Bradley and animated by Ed Barge, Kenneth Muse, Irven Spence, and Ray Patterson.

Episode starts: Mammy Two Shoes is shown getting ready for a night out, applying nail polish and liberal amounts of jewelry, unaware that Tom is spying on her. She struts past him as he feigns sleeping in his basket and saunters out the door, hooking it shut with her foot. The moment that she's gone, Tom ascertains that she's on her way and mocks her flamboyantly executed exit before dashing to the window and whistling to his alley cat pals. When they look, he holds up a sign saying "OK FOR THE PARTY!" and the alley cats holler in delight and jump through the window. Lightning mans the phonograph, Butch hammers away at the piano, and Topsy plays a tune on some wine glasses (Water Glass Xylophone) as Tom provides refreshments, sandwiches for Lightning and Topsy and a pie for Butch.

But all the racket has disturbed Jerry's sleep and as he sits in bed frustrated, his body starts to mimic the instruments used in the music. Finally losing his rag, Jerry storms out and accosts Tom, explaining (almost illegibly) that he's trying to get some sleep and cannot because of all the racket. Unsurprisingly, Tom and his pals don't listen and put Jerry through a painful and humiliating ordeal finishing with him getting his rear impaled with record pins. Furious, Jerry proceeds to disrupt the proceedings personally by tearing out the phonograph's needle, shutting Topsy in a drawer and slamming the piano lid shut on Butch's fingers, barely escaping their reprisal attempts. They lure him out by switching the radio on and then chase him after he pulls the plug. Topsy tries to squash him with his dustbin lid hat, but is left only with four taunting caricatures of Jerry imprinted in it. Jerry then backtracks as the three bigger cats come after him, but he ceases their pursuit after shutting the top half of a door, causing them to run flat-out into it. Hiding behind a curtain, he nicks Topsy's lid as he runs past then puts it in the cat's path as he comes running back. Trying to escape through a window shade, Jerry is flattened and promptly tied up in the drawstring. With him out of the way, the cats resume their party whilst leaving Jerry trapped by the Reverse bungee and forced to listen (Piano: Butch, 2 Guitars: Lighting and Tom and Cymbal: Topsy's lid). This, however, turns out to be the proverbial final straw for Jerry who decides to call in the big guns. Managing to negotiate his way over to the telephone, Jerry proceeds to ring up Mammy Two Shoes to inform her of the unauthorized proceedings taking place in her residence.

Mammy is shown playing bridge with her friends when the phone rings. She answers it and, after confirming her location and identity, is startled to be informed of a party at her house. Immediately deducing who must be responsible for said party, Mammy (in the space of two seconds) slams the phone down and excuses herself before rushing out, sending the cards flying. Outside, Mammy races down the street at 90 miles per hour (145 km/h) (showing her face for a split second for the first and only time in Tom and Jerry history), kicking up dust and debris as she speeds on her way. Not slowing her pace even as she approaches her house, Mammy crashes into the door with such force that it and part of the surrounding wall are ripped out and slide to a halt in front of the cats, who stop playing at this sudden intrusion into their midst. When Tom opens the door, he sees Mammy standing there with her hands on her hips and (presumably) a furious look on her face. The moment that she sees him, Mammy points her finger in dire accusation and shouts "Thomas!". Realizing that his life is in imminent danger, Tom slams the door shut on her and flees. However, Mammy's arm extends and grabs him by the tip of his tail and drags him back for a beating. Outside, the entire house crashes and thrashes about as Mammy unleashes her wrath upon the cats, sending the roof sections flying into the air before the door flies open and Tom comes sailing out, shortly followed by Lightning, Topsy, and Butch in that order. One by one, they slam into a street wall and form a totem pole.

Inside, Mammy badmouths the cats and curses them for ruining her entire evening. To Jerry's dismay, however, she decides to relax with a "little soft, soothing, hot........Music!", leaving him in the same position as before, mimicking the instruments again.

Mammy's face is shown in this frame

4 Cats into the Totem Pole, with the aforementioned color errors 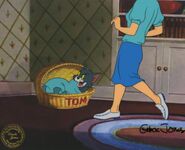 The 1960s CBS re-airing, in which Mammy was replaced with a white teenage girl.
Community content is available under CC-BY-SA unless otherwise noted.
Advertisement