Tom and Jerry Wiki
Register
Don't have an account?
Sign In
Advertisement
in: Characters, Males, Humans,
and 4 more

The Straycatchers are antagonists in Tom and Jerry: The Movie. They work for Dr. Applecheek. They are voiced by Michael Bell and the late Sydney Lassick.

The Straycatchers are first seen when they capture Puggsy and Frankie DaFlea in the alley and leaving on their truck. They are again seen putting Tom and Jerry one of the cages who been brought by Pristine Figg. Later when Tom, Jerry, Puggsy, Frankie DaFlea and the other dogs including (Droppy) escape knocking them out along with Dr. Applecheeks. They later arrive at Aunt Figg's house waiting in the truck with Dr. Applecheek blaming the incident on Aunt Figg who denies it but is willing to take the blame when he received a call from Captain Kiddie who then tells her that she has Robyn. While on the way to Captain Kiddie's carnival Dr. Applecheek must get Robyn before Figg and the million Dollar reward bounty on Robyn will be his and he refuses to share with the Straycatchers if they did not get rid of Tom and Jerry. Angered, the straycatchers throw Dr. Applecheeks out and drive off laughing maniacally, leaving the helpless doctor yelling at them to come back and is almost being run over by Lickboot. They arrive late at the carnival and see Robyn in Kiddie's Ferris wheel, but they end up trapped into it by Tom and Jerry. When Dr. Applecheeks arrive using an ice cream motorbike they called him to help get down from the Ferris wheel, but he refused and continued the chase on Robyn, Tom and Jerry with Figg, Lickboot, Ferdinand and Kiddie. It is unknown what happened to the Straycatchers afterward but it's presumed they are arrested by Robyn's father for their involvement of the one million Dollar bounty reward on Robyn. 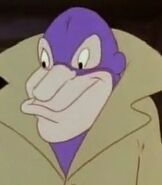 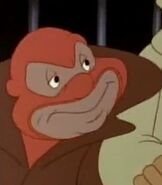