The Framed Cat
The Hollywood Bowl is a 1950 Tom and Jerry cartoon, in which Tom is a famous conductor playing for many people, but Jerry has equally good skills and wants to be where Tom is. In the end, Tom and Jerry get into a fight. It ends with Jerry as the winner and composer.

Tom enters to the stage to rapturous applause. Tom bows down and starts conducting the cat orchestra to the overture of "Die Fledermaus". Jerry emerges from a mouse hole which has a Hollywood Bowl-like exterior. Jerry rushes to the podium to conduct the orchestra alongside Tom. Tom notices Jerry and attempts to flatten him with his baton, until he sees Jerry continuing to conduct the music, from Tom's baton. Tom stuffs him into his suit and continues to conduct the orchestra, but Jerry pops out from both of Tom's sleeves, then his dickie to conduct further. Tom grabs him and catapults Jerry from his baton, and Jerry lands safely on a harp, but as his eyes are closed while conducting, he doesn't realize where he is at first. When he does open his eyes, he glances angrily at Tom. He offers to dance the Du und du with Tom, and the cat dances innocently with the mouse, until Jerry sends Tom spinning into a cello. Tom gets his revenge on Jerry by offering him a chance to dance. He pummels and wallops Jerry around the stage and hurls him into a tuba, where he is "squirted" by the blowing of one of the orchestra members into the instrument.

The attempts of both cat and mouse to get one up on each other continues, with Tom using his baton as a snooker cue to pot Jerry off the podium. When Jerry pleads and begs Tom to let him conduct the orchestra, Tom uses Jerry's baton as a toothpick and throws it away. Jerry retaliates by snapping Tom's baton in half and then throwing that away, only for Tom to produce a spare baton from his pocket. Jerry then hammers some wheels onto the podium and pushes the podium (with Tom still on it) out of the amphitheatre. Tom, unaware of what is going on, continues to conduct, as the podium travels out of town and into the road, where he is promptly flattened by a bus.

By now, Tom is furious. He returns, with his suit torn and his eyes blackened, and grabs Jerry by the coat-tails, and dangles him between two cymbals, which are bashed together, flattening Jerry. A flat and almost transparent Jerry floats down to the floor and pops back to his full size and structure. Deciding to sabotage the concert, Jerry grabs a saw and starts sawing underneath the floor of the orchestra, causing the feline members of the orchestra to suddenly disappear under the floor. Jerry disposes of the orchestra members, one by one, until only Tom is left to play all of the instruments while Jerry conducts and the concert ends.

And of course, Jerry takes all applause and credit for himself, then he points to Tom, who is now very tired. Then Tom stands up, bows down (actually nods) ... and also falls down like the orchestra.

Textless Varient of the Tom and Jerry logo, only used on this short 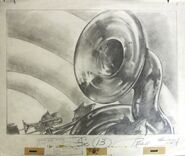 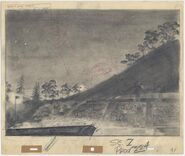