Technicolor (not in true technicolor)

The cartoon begins outside of the house and then goes to Tom, who was taking a nap, but was woken up by Jerry. Tom peeks through the mouse hole to see what the noise was and sees Jerry smacking a punching bag that looks like a cat. After Jerry finishes with the punching bag, his spiritual mentor appears and asks him if he's ready to take on the cat, which is Tom. Jerry nods yes. After Jerry walks out of his mouse hole he sees Tom at the end of a hallway and becomes afraid of him, until Tom starts to mock Jerry. He then laughs at the thought of Jerry defeating him. Jerry then decides to go and fight Tom until Tom pulls out a flyswatter and hits Jerry with it a couple of times. After beating him, Tom then slingshots Jerry with the flyswatter back into his mouse hole where he runs into one of his walls. Jerry's spiritual mentor appears again and gives Jerry a gong to ring that summons a "Karate Guard" named Momo-sumo (played by Spike) to aid him whenever he needs help.

The short deals with Tom's attempts to catch Jerry. He does not know about Spike at first. As soon as Jerry rings the gong, Spike sticks out his arm and Tom yelps and spins. He is then tied to a lawnmower and is launched into a garbage can. Tom moans in pain from hitting the garbage truck wall. The garbage truck door then closes and Tom screams in pain. In the next scene, Jerry is eating cheese and Tom tries again. He tries to grab Jerry, but Spike appears and brutally slices his tail, causing Tom to faint. Tom then puts pillow-like earmuffs on Spike. When Tom threatens him, Jerry attempts to ring the gong. Tom demonstrates this again, by showing him his bodyguards' lack of response. Tom dings the gong close to Spike's ear. However, Spike awakens this time and shoots Tom into the air. Tom yells in fear and claws the roof he landed on for dear life. It doesn't work and he is teetering on the gutter's edge. Tom does a quick salute and falls. Then Tom takes a giant leap and lands on the roof. Tom, who was shaking in fear, heaves a sigh of relief. Jerry does everything he can to anger Tom, like making very silly faces and even flashing the seat of his underwear from under his robe at him. It works, and the chase is off again. They chase into a toy store where Jerry hides in an airplane. Jerry turns it on and skins Tom's head and then shaves Tom's body. As soon as Tom's fur comes back, the chase starts again. He boards an airplane of his own and begins to disintegrate Jerry's. Tom raises his eyebrows as if to say "I got him now and nothing can stop me!" Jerry gongs for Spike and Tom hits Spike's chest, causing Tom to disintegrate. Spike sweeps him up and throws him in a trash can. Tom manages to reassemble, and desperately calls an exterminator, Butch, along with three more cats to remove Spike from the household. They do nothing more than fire paint-balls at Spike, who is thrown by the force into the swimming pool; Tom then breaks out laughing. However, Spike then grabs Tom and squashes him into a bowling ball which he uses to, literally, strike the cats out of the garden.

Finally, Jerry and Spike are watching TV (which is showing the battered exterminator cats with Butch opening his mouth and catching all his fallen teeth) and eating popcorn. Jerry rings the gong, and Tom arrives to bring more popcorn to Jerry and Spike. Tom kisses Spike's feet, which Spike approves of. Jerry dives into the popcorn and munches it happily. 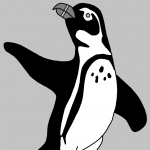