The Yankee Doodle Mouse is a 1943 American one-reel animated cartoon. It is the eleventh Tom and Jerry short.

Tom pursues Jerry through a cellar, but the mouse successfully dives into his mouse hole (labeled "Cat Raid Shelter"). Tom peers into the hole, and Jerry launches a tomato from a mousetrap into his face. Jerry then climbs up the wall and grabs a handful of eggs from a carton marked "Hen-Grenades". As Tom wipes the tomato off his face, he is promptly covered in egg, with one hit to the eye leaving the effect of him wearing a monocle. Jerry shoots off the corks from a champagne case, knocking the cat into a tub of water with only a pot to keep him afloat. The mouse promptly launches a brick from a spatula, sinking both pot and cat. A war communiqué is displayed, reading "Sighted cat – sank same. Signed, Lt. Jerry Mouse."

Tom approaches Jerry's mouse hole with a mallet in his hand, while Jerry uses a pipe as a makeshift periscope to observe; spotting this trap, he instead opens the ironing board cupboard, sending the board crashing onto Tom's head. The mouse charges down the board on a jeep made from a cheese grater attached to a roller skate, tearing Tom's fur as he speeds past, after which the jeep crashes into a wall, sending a sack of flour tumbling down. Adapting quickly to the situation, Jerry grabs the sack and spreads a makeshift flour smokescreen, which blocks Tom's vision but not Jerry's. He repeatedly smacks the nearly blind Tom in the rear with a board, but eventually, Tom falls to the ground facing the mouse; he slaps Tom a fourth time before the cat can do anything, leading to the lost segment of the short.

After this lost segment, Tom, now wearing a bowl as a helmet, throws a stick of dynamite towards Jerry, who immediately throws it back to Tom; this continues until Jerry takes it from Tom, provoking the cat to steal it back and this new cycle to continue until Jerry leaves Tom to triumphantly hold the exploding stick. Jerry jumps into a tea kettle to escape the cat's wrath, but Tom sees him and throws another firecracker into the kettle; Jerry panics, but the oxygen has run out and the mouse escapes through the spout with no explosion. The puzzled cat opens the kettle's lid and sticks his entire head in just as the firecracker goes off causing Tom's blackface to look like a flower.

Continuing his attempts to blow up the mouse, Tom launches a paper airplane with a firecracker hidden on top, but Jerry blows it back beneath Tom, who barely spots the firecracker before it goes off and is again black in the face. Jerry then plants an enormous stick of dynamite behind Tom; the cat sees it and screams in terror until the cracker splits into successively smaller sticks reminiscent of matryoshka dolls, ending with a minuscule replica of the original firecracker. Tom believes this harmless, but the dynamite explodes powerfully.

Jerry then jumps into a makeshift plane fashioned from an egg carton and drops a succession of light bulbs and a banana bomb, which hit his head and face. Tom grabs a firecracker launcher and skillfully shoots down Jerry's now weaponless plane. Jerry uses a brassiere to parachute from the plane, but is again shot down by Tom. Jerry races into his mouse hole to escape, but Tom pushes a cannon into the hole and fires off seven shots.

The mortar pursues Jerry through the cellar and eventually, he leads them into a hose, which he shoots like a machine gun back into the barrel of Tom's cannon. The barrel explodes, leaving Tom riding the remaining parts of the cannon like a bicycle, which then crashes into the wall. Recovering, Tom fires a dart gun at Jerry, which hits him on the tail as he again attempts to dive into his mouse hole.

Tom grabs the mouse and ties him to an ignited rocket; Jerry pretends to help himself be tied up, but unknown to Tom he is actually strapping the cat's hands to the rocket. Jerry emerges from the ropes, and the puzzled Tom does not realize what has happened until Jerry waves at him. He futilely attempts to blow out the fuse, but the rocket shoots high into the sky and explodes there, forming the US Stars and Stripes. Jerry proudly salutes the flag, and a final communiqué is displayed, saying "SEND MORE CATS! Signed, Lt. Jerry Mouse."

Hungarian: Ezt szeretem az Éjszakában (That's What i like about the Night)

The original layout drawing of a background for the deleted scene on the Cartoon Network Department of Cartoons website. 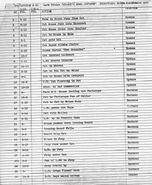 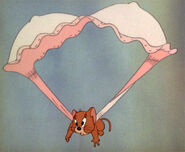