Much Ado About Mousing
Purr-Chance to Dream
The Cat's Me-Ouch!

Much Ado About Mousing

Tiny Bulldog is a recurring character in the Chuck Jones-era of Tom and Jerry.

Tiny is a yellow brown-ish in most of appearance, in Rock 'n' Rodent a bulldog (possibly could be Tiny) has a different fur coat than his previous appearances. He could be big or small in some of his appearances.

This nameless mouse-sized bulldog, designed similarly to Spike the Bulldog, was shown in Much Ado About Mousing, Tom-ic Energy as a big dog and Cat's Me-Ouch! and Purr-Chance to Dream. His role is similar to Spike in cartoons such as The Bodyguard, Fit To Be Tied, which is to defend Jerry against Tom. His looks and personality are similar to Spike. Unlike Spike and Tyke, he has a big bite (similar to those of Looney Tunes' Tasmanian Devil).

Tom Laughing At The Dog Because of It's Size

Tom Pointing At The Bulldog 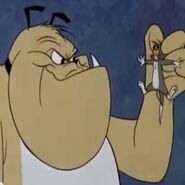 Tom Seeing Him In His Nightmare As A Huge Beast