Tom and Jerry Wiki
Register
Don't have an account?
Sign In
Advertisement
in: Cats, Characters, Males,
and 19 more

Jeannie (hurting him with a broom)

Thomas "Tom" Cat is a a grayish-blue anthropomorphic cat who first appeared in the 1940 short Puss Gets the Boot. Tom was originally known as "Jasper" during his debut in that short, but beginning from his next appearance in The Midnight Snack and onwards, he is known as "Thomas", but is mainly called "Tom" for short.

Tom is shown mainly to be interested in catching Jerry and tries to eat him. His son is one of the main characters in Tom and Jerry Kids show. He is scared of Spike and whenever he sees him, Tom can get very uneasy. Tom is also interested in female-cats and has tried to impress them many times, but he fails due to Jerry's antics, or maybe for some other reason.

Tom likes to eat fish, meat and almost every type of food except for cheese. His favorite drink is milk.

In most of the episodes, Tom is the seemingly villain and loses to Jerry. However in a few episodes Tom is the winner and sometimes, none are.

He is shown to be friends with Butch, but however sometimes both of them are rivals. Jerry says that he is stupid and weak, interested only in eating, but this not true. Tom is winner of many sports, and the "Catch the Mouse" competition. He is a literate chemist, and loves reading criminal books.

His full name, "Tom Cat," is a pun on "tomcat," a phrase which refers to male cats. He is rarely heard speaking with the exception of a few cartoons (such as Tom & Jerry Tales' League of Cats and the poorly received Tom & Jerry: The Movie) His only notable vocal sounds outside of this are his various screams whenever he is subject to pain or panic. He is continuously after Jerry Mouse, for whom he sets traps, many of which backfire and cause damage to him rather than Jerry. Tom rarely sets out to eat Jerry, only to hurt or compete with him, going to great lengths in order to torment Jerry. However, Tom is shown to get along with Jerry at times. Tom has changed remarkably over the years, especially after the first episodes. For example, in his debut, he was quadrupedal and had normal cat intelligence. However, over the years (since the episode Dog Trouble), he has become almost completely bipedal and has human intelligence. As a slapstick cartoon character, Tom has a superhuman level of elasticity. When acting as Jerry's antagonist, Tom is usually defeated in the end, although there are some stories where he outwits and defeats Jerry.

Tom and Jerry appear together in the 1945 Technicolor Metro-Goldwyn-Mayer musical Anchors Aweigh where Tom briefly appears as a butler for Jerry, the latter of whom has a dance sequence with Gene Kelly, and also in another musical with the same studio Dangerous When Wet (1953), where, in a dream sequence, main character Katie Higgins (Esther Williams) does an underwater ballet with Tom and Jerry, as well as animated depictions of the different people in her life.

Tom in the snow, throwing a bottle with a note in it asking for help. 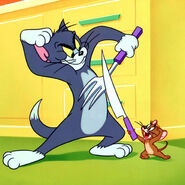 Thomas "Tom" Cat as seen in Tom and Jerry: Shiver Me Whiskers 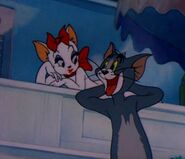 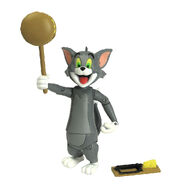 This is Tom's Cousin George who is scared of mice.