Aside from other Tom & Jerry characters, Tom Cat Jr. is the son of Tom Cat from the MGM shorts, and is one of the main characters in the Tom & Jerry Kids Show.

Tom Cat Jr. is a young anthropomorphic cat with bluish-gray fur, a light gray stomach, a light gray section of his face between the eyes, white hands and feet, a while tail point, a white muzzle with a black nose and whiskers, yellow eyes with black pupils, bushy eyebrows, a clump of hair, and wears a trademark red baseball cap with a blue stripe. In some appearances, he wears clothing during particular events. He and Jerry also appear in some segments based upon historical events, but that it's rather their imagination, since they live in a more modern world. During most of his appearances, he often attempts to catch Jerry, whom he claims is a pest, but is prone to getting injured somtimes can be stupid dum and annoying to people and jerry Although he doesn't talk, he has been shown to use the telephone on certain occasions.

Although Tom usually wears only his baseball cap and normally doesn't wear clothes, he was seen wearing clothes in some episodes. His baseball cap is normally worn frontwards; but in Pump 'Em up Pals, he wore his baseball cap backwards while working out. He sometimes wears his trademark baseball cap with some of the clothes he wears. In Chase School, he was wearing an orange jacket with a white V-neck shirt with a yellow collar underneath, baggy blue jeans, and white loafers; although the tomcats in the crowd were only wearing the jackets, shirts, bowties, and caps. In Penthouse Mouse (not to be confused with the MGM short with the same title), he was wearing a pair of azure overalls. During his fourth and final attempt to catch Jerry in Catch That Mouse, he was wearing a white athletic shirt with shoulder straps and a pair of green shorts with a yellow stripe on each side. In I Dream of Cheezy, he wore a white keikoji with a white belt and an azure hachimaki while training at Sergeant Boffo's Ferocious Feline Mouse-Bashing School. In Beach Bummers, he wore a pair of red swimming trunks and a green swimming top with a blue stripe along with his swimsuit, but is usually topless when wearing a swimsuit in other episodes.tom can sometimes attempting to kill jerry In Cast Away Tom, he briefly wore a yellowish-orange jungle toga to imitate Jerry who was acting like Tarzan. For formal occasions, he wears a tuxedo with a bowtie and sometimes wears a top hat. In The Watchcat, he was wearing an auburn uniform consisting of a jacket with a tan satchel strap and belt with a gold prong, and a hat with tan band and gold badge and black brim, and went under the title of "watchcat" (a play on the word "watchdog", due to his specie of being a cat, although the word "watchdog" is a slang word for "guard"). In Cosmic Chaos that has a futuristic time setting, he is shown wearing a similar baseball cap that is a half red and half blue cap with a silver antenna in the rear, a red satchel strap clipped onto a blue belt with a red and green triangle pattern on the front, and a pair of blue and green rocket boots that blow out flame from the rear pipes during acceleration and to shoot missiles from the bottoms. 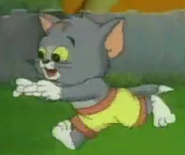 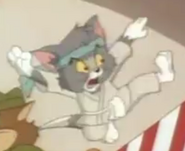 Tom in his watchcat uniform

Tom in his futuristic apparel

Dislikes: Getting injured, being retaliated