Thomas James Kenny (born July 13, 1962) is an American voice actor and comedian. Best known for the voice of SpongeBob SquarePants , the voice of Spyro the Dragon, Scoutmaster Lumpus, Slinkman, Beavey, Big Hairy Moutain Man, the Big Bean, Cow Scoutmaster aka the Real Scoutmaster of Camp Kidney Clyde, Cheesley, and Phil on Camp Lazlo, Heffer from Rocko's Modern Life, Ice King on Adventure Time, and the voice of Rabbit replacing Ken Sansom in the Winnie the Pooh media. He also does the voices of The Martians on Tom and Jerry: Blast Off to Mars, Gorthan, The Destroyer of Light on Tom and Jerry: The Fast and the Furry, Calaboose Cal in Tom and Jerry Meet Sherlock Holmes and Dr. Bigby, Hamster, Melfred, Ronnie the Rabbit, Percy, and other characters in The Tom and Jerry Show. 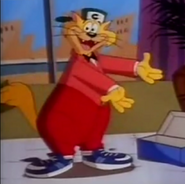