Tom and Jerry Wiki
Register
Don't have an account?
Sign In
Advertisement
in: Direct-to-video films, Tom and Jerry Films, Hanna-Barbera Cartoons,
and 2 more

Tom and Jerry: A Nutcracker Tale

Tom and Jerry: A Nutcracker Tale is a 2007 holiday-themed animated direct-to-video film starring Tom and Jerry produced by Warner Bros. Animation. It uses a good deal of Tchaikovsky's famous ballet The Nutcracker as background music.

This made-for-video film would be the last animated production for co-creator, Joesph Barbera, who died on December 18, 2006, almost 10 months before the film hit shelves. Barbera was the last surviving member of the famous animation duo, Hanna-Barbera, and had outlived his colleague, William Hanna by well over five years. The made-for-video film also features all of the exaggerated violence usually found in the original Tom and Jerry theatrical shorts. The film is dedicated in Barbera's memory.

The movie begins with Jerry and his young ward Tuffy (who here sports his French accent from the Mouseketeer shorts) watching the Christmas ballet. Later, Jerry goes to the empty stage floor, where magic begins to happen. Toys come alive including Nellie the pony (who can only talk if someone pulls her string) and Paulie the Christmas Ornament (who was missing a head, due to Jerry kicking it earlier on). The magic then makes Le Petite Ballerina, (a ballerina) come to life, and Jerry dances with her.

The stage is transformed into a wintry wonderland, where the toys are enjoying dinner. Tom, who is in the alley looking for something to eat, hears this, and, with the other cats, raid the feast, trapping the toys. Jerry, Paulie, and Nellie try to stop this, but are shot out of a cannon. Tuffy escapes, Tom as the Captain of the Cat Guards traps the Ballerina in a cage, then brings her to the Cat king, where he asks her to dance for him, but she refuses and tells the cat that she will never dance for him, especially after what happened earlier with the take over. The Cat king tell the Ballerina there is nothing she can do about it, in which she reminds him about Jerry, and that he will never give up. Later on, Tom is called to gather men and stop Jerry. Tuffy gives the Ballerina a string attached to keys, on the end of which is keys. He then goes to stop Tom. Meanwhile, Jerry, Paulie, and Nellie decide to follow the star to a man called the Toy Maker. They stop in front of a frozen river. All make it safely, except Jerry who falls in, and becomes tangled in weed. He is freed, and is pulled up by Nellie and Paulie. This makes Paulie unravel. Tuffy gets to Tom, and dresses up as an angel and a devil. He is found out, and ends up sticking a trident in Tom's eye, which the cats hold together like a ladder, causing them to fall in a cliff (Tom screams the Wilhelm scream). He runs to Jerry, warning him of the cats. Tom and his friends, disguised as Christmas trees, surround Jerry, but Tom gets attacked by squirrels, and shredded in a tree shredder. The cats attack, but the heroes escape, inside a tree. The cats beat up Tom by mistake.

Later, when the cats attempt to escape the army of toy soldiers, the Ballerina appears with the other toys, and she leads them in an army as a way to show the Cat king how they felt being locked up. Tom vacuums up many of the soldiers, but they are blown onto the cats. Jerry and Tuffy are eaten by Tom, but Nellie returns, and throws a hammer, smashing Tom's teeth. Jerry then pushes a toy train and all the cats ride on it until it hits a wall and the wreckage goes into a box, with all the bad cats inside. Then the Ballerina hugs Jerry telling him that she never doubted him. Then, a wall falls down on Nellie, but fortunately, the magic revives her, and she begins to talk on her own, without a string having to be pulled. King Jerry and the Queen Ballerina dance after receiving their crowns back and the curtain is let down, revealing that the entire movie actually was a play. Ending the movie.

The Bad Cats are Defeated

Cats taking over the kingdom 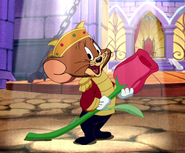