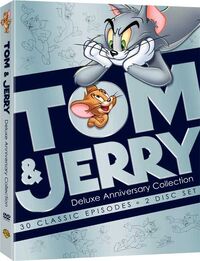 June 22, 2010 marked the 70th anniversary of the release of the very first Tom & Jerry cartoon. (Puss Gets the Boot)

All of Disc One have been released on previous Tom and Jerry DVDs especially the three previous Spotlight Collection volumes.

This collection completely excludes the Gene Deitch reels, which can be seen as a result that the manufacturers wanted to market the US pacific episodes in this collection as the Deitch-era were imported from Czechoslovakia.

Trailers (Not on the region 2 version)

Gene Deitch's "Dicky Moe" (1962) is prominently featured on a Disc 1 menu screen, but is nowhere on the set.

Just as they were on the original release of the Spotlight Collection, Vol. 1, the shorts "The Milky Waif" and "The Little Orphan" have been edited to remove scenes where characters are seen in blackface. Likewise, as it had at one time been on Vol. 2, the short "The Lonesome Mouse" has redubbed dialogue to remove the stereotypical dialect of the African American maid (Mammy Two Shoes).

2 denotes cartoons that are new to DVD.

As well Cosmic Cat and Meteor Mouse, the premiere episode of The Tom and Jerry Show has been released as part of Warner Home Video's Saturday Morning Cartoons – 1970s Volume 2 on October 27, 2009; it marked the first home video release of the 1975 made-for-TV version of Tom and Jerry and the only home media release of the 1980 series, which those two shows are not scheduled to have a complete series on DVD at this time. Three of the Chuck Jones cartoons were from the UK version of the Chuck Jones Collection.

Despite it being marketed for "Adult Collectors" and its fetching cover art, this set is panned by fans for the use of censorship involving the redubbed audio of Mammy Two Shoes and scenes being cut, as well as including the atrocious pan-and-scan versions of the CinemaScope shorts.