Tom and Jerry Wiki
Register
Don't have an account?
Sign In
Advertisement
in: Direct-to-video films, Tom and Jerry Films, Magic-themed Cartoons,
and 2 more

Tom and Jerry: The Magic Ring

Tom and Jerry: Blast Off to Mars

The story starts out in a creepy-looking mansion, where Tom, as usual, chases Jerry. Meanwhile, in the basement, a wizard named "Chip" is making a magical potion, using these ingredients: warts from a bullfrog, one stick of butter, and milk from a cow that lives in Kolkata, India. With a count of three, he uses his magic ring to make his potion, until it is realized that it doesn't work. Chip checks the milk carton that he used on the potion, but there is no substitution for the milk of the cow. He then drops the milk carton on the bullfrog in frustration.

Later, Tom ends up in the basement, and Chip orders him to guard his magic ring than chasing Jerry while he goes to Calcutta to milk a cow. If Tom does a good job, he'll be rewarded with a big juicy salmon, but if not, he shall be kicked out of the house. Chip leaves for Calcutta by using his motorcycle, and Tom guards the ring. Behind Tom's back, Jerry climbs up on the table, where Chip left his magic ring. Jerry wears the ring on his head as if it were a crown, which makes him look royal.

Tom spots Jerry, and orders him to give back the ring. Soon, Jerry runs out of the house, and Tom frantically attempts to find him. After losing Tom, Jerry tries to pull the ring off his head, but it is stuck, to his horror. He attempts to get it removed by going to the store of a diamond cutter, who is heading for lunch. The store is closed, but right when the diamond cutter leaves out of his building, Tom steals his key and goes inside. Tom disguises as him to get the ring off of Jerry. He uses several methods, including slicing the ring off with a buzzsaw who now has a face who begins to chase Tom, which all fail, then Tom's fake mustache falls off, revealing his true identity. Tom chases our mouse throughout the store, and soon, the diamond cutter returns. Tom and Jerry exit the store.

Jerry runs off into a fortune-teller home, where an Irish dog and Droopy from the Tex Avery cartoons are residing in. After seeing how lovely Jerry's ring looks, and including the fact that Jerry wants it removed, the Irish dog attempts to pull it off. Tom comes in, and Jerry runs out, with the Irish dog chasing after him as well. Soon, they end up in an alley, where Butch happens to be taking a nap. He wakes up and tries to grab Jerry for his dinner. Tom successfully grabs Jerry in time, and by pressing the ring on his head, makes random objects fall on a horrified Butch. Accidentally, Jerry's ring increases the size of a banana peel, which Tom trips on, and the ring in Jerry's head was removed and it gets back after being rolled over and gets knocked unconscious by the door of a pet store.

A kind old lady comes out and brings the two inside. Jerry is put in a cage with his ward, a cute young mouse named Nibbles, as well as two mouse thugs: Jerry's cousin Freddie (formerly Muscles), and Joey, Freddie's dumber partner. Unfortunately, Tom is thrown in a cage with Spike and his son Tyke and they attack Tom. The mice harass both Nibbles and Jerry and chases Jerry in cars. He turns Freddie and Joey into cheese, but Jerry then zaps Nibbles to turn him giant. This leads to a chase between Nibbles and the cheese mice, who all run out the door. A young boy comes and buys Jerry. The boy plays with Jerry until the ring produces magic, melting Tom and escaping the cage, he sneaks outside and snatches Jerry from the boy's hand. The child cries and his mother sends policemen after the cat.

Then, Butch and the Irish dog still find for Jerry and finds Tom and they chase him. Meanwhile, Spike and Tyke get out of the building as well, but right when Tom steps on Tyke. Now, Spike and Tyke are added in the chase. They run everywhere and Tom and Jerry escape by riding a bus. Suddenly, the bus stops and it reverses, causing Tom and Jerry to panic. The driver was Droopy, then, they were lost until the boy finds Tom and whistles and was cornered in a dump. After a segment of running, Jerry freezes the people after them. Tom and Jerry shake hands, and together, they go back home.

Tom politely asks Jerry to remove the ring, but he still can't. Tom takes out a flamethrower to get the ring off, somehow, but Jerry runs around the house in fear. The mouse finds a ring-removal liquid (actually to be used to remove rings made by drinking mugs from tables), which gets it off. Tom finds Jerry and demands the ring, which Jerry throws into the tunnel leading to the basement's waste-basket. Tom frantically jumps in as well, but gets the ring stuck to his finger. Tom hears his master coming and tries to get the ring off, but to no avail. Chip, believing that Tom attempted to steal his ring, kicks him out of the house, where the ring falls off Tom's finger, and to his horror, it unfreezes all who chase him: the alley cat, the Irish dog, Spike, Tyke, the police, Nibbles, Freddy, and? Joey. Then, Chip gives Jerry the salmon and he turns it into a cheese by the ring's power. 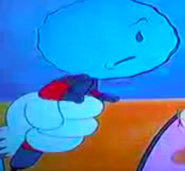 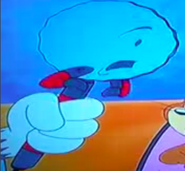 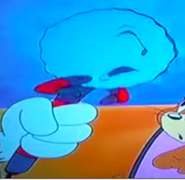 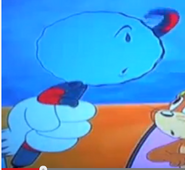