Tom and Jerry Golden Collection is a series of two-disc DVD and Blu-ray sets, currently in production by Warner Home Video. The releases are expected to be uncut and in chronological order. The first volume was released on October 25, 2011, and features 37 shorts (roughly one-third of the 114 Hanna-Barbera produced/directed shorts).[1] The second volume, which will feature 42 shorts, was initially scheduled to be released on June 11, 2013, but was later postponed indefinitely.[2][3][4]

Although the shorts are presented digitally restored (just like how it was shown in the movie theaters), many of the original pre-1951 MGM cartoon negatives have been destroyed in a 1965 MGM Vault fire so not all the pre-1951 Tom and Jerry cartoons could be presented in pristine condition. In the first volume, a handful of shorts appear with washed out colors and grainy picture although digitally remastered; Puss N' Toots, The Bowling Alley-Cat, Sufferin' Cats!, The Lonesome Mouse, The Zoot Cat, The Million Dollar Cat, Puttin' on the Dog, Mouse Trouble, Quiet Please!, and The Milky Waif. Meanwhile only two cartoons from the second volume are badly remastered this way; Heavenly Puss and Jerry's Diary.

It had been announced that Mouse Cleaning would be available on the Tom and Jerry Golden Collection - Volume 2 on DVD and Blu-ray, with the short being presented uncut, uncensored, and restored from its original nitrate elements that had been recently discovered.[5] The set was originally scheduled to be released on June 11, 2013. However, on February 6, 2013, it was announced by TVShowsOnDVD.com that Mouse Cleaning was not a part of the list of cartoons set to be on the release, as well as the cartoon Casanova Cat, which was also skipped over on the Spotlight Collection, Volume 3 DVD release in 2007 (both cartoons are accused of featuring controversial content, specifically allegedly racial stereotypes of the time in which they were originally produced).[6] Many collectors and fans proceeded to post negative reviews of the product on Amazon and other various websites in protest. In addition, Jerry Beck, who already wrote liner notes for both shorts for the release, was shocked to hear about the omissions, saying that he wrote notes for both cartoons and that they were supposed to be included on the set.[7] When asked for an interview request, a Warner Bros. spokesperson said “The company felt that certain content would be inappropriate for the intended audience and therefore excluded several shorts."[8] However, on April 1, 2013, the second set was confirmed to be delayed indefinitely.[9] 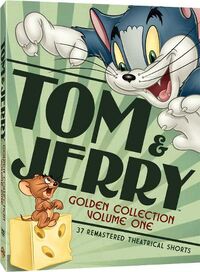 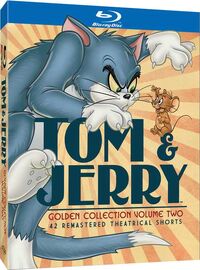 Volume Two was scheduled for release on June 11, 2013 before it was delayed indefinitely.

Retrieved from "https://tomandjerry.fandom.com/wiki/Tom_and_Jerry_Golden_Collection?oldid=97279"
Community content is available under CC-BY-SA unless otherwise noted.