The Tom and Jerry Spotlight Collection is a series of two-disc DVD sets, released by Warner Home Video. Originally planned as an uncut, chronological set, the issued Spotlight Collection sets wound up including selected Tom and Jerry shorts on each volume. Volume one was released on October 19, 2004, volume two on October 25, 2005, and the third and final volume on September 11, 2007. On October 15, 2019, the set was repackaged and had fixed some of the errors, which consists of 4 discs. The only content missing from the repackaging version was the commentaries.

Volume 1 does not include any cartoons where Mammy Two Shoes, an African-American maid character, speaks; she is briefly seen, though not heard, in The Little Orphan. By contrast, Mammy appears in several cartoons on Volume 2, although production errors led to a mixing of audio tracks so that some cartoons include the original Mammy Two Shoes dialogue performed by Lillian Randolph, while others include redubbed dialogue tracks commissioned by Turner Entertainment in the mid-1990s to censor the Black dialect in the character's dialogue.

While these volumes are mixed-to-panned due to the omission of two cartoons and edited one short, the erroneous inclusion of edited and redubbed cartoons on Volumes 1 and 2 (though these problems were later corrected on later reprints) and the notable lack of restoration work done on most of the cartoons (having been lazily sourced from the mid-1990s Turner television remasters instead (though in the case of "The Truce Hurts" on later printings of Volume 1, an older unrestored late-1980s VHS/laserdisc transfer), these sets are also praised for the restoration of the 2.55:1 CinemaScope reels as the frames are intact (unlike the VHS versions and TV airings of the CinemaScope reels that were infamously released in pan-and-scan, making them completely unwatchable due to losing half of the animation), with the erroneous exception of Pup on a Picnic.

Contents of each volume 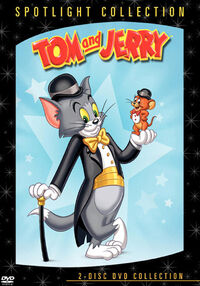 A superscripted one ( 1 ) denotes cartoons presented in the CinemaScope aspect ratio using a new anamorphic widescreen transfer. Most (if not, all) cartoons on Disc One are uncut. 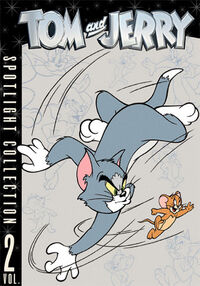 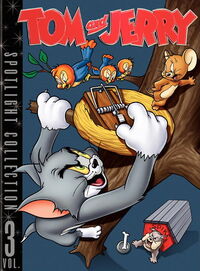 Vol. 3 completes the Hanna-Barbera Tom and Jerry cartoons, save for Mouse Cleaning and Casanova Cat. According to a Warner Home Video press release, these cartoons were omitted from the set for racial stereotyping.[1] (These cartoons are presented uncut on the European PAL DVD set Tom and Jerry - The Classic Collection, with Mouse Cleaning appearing on Vol. 2 and Casanova Cat appearing on Vol. 3 of this series.)

A superscripted one ( 1 ) denotes cartoons in the standard Academy ratio presented in newly remastered versions.

(All cartoons in CinemaScope - 16:9 widescreen)

The Tom and Jerry Spotlight Collection sets have received intense negative consumer reaction, due to the edits in certain cartoons on each set.

The first set contained three edited shorts (The Milky Waif, The Truce Hurts and The Little Orphan), which Warner stated was a mistake. All three of these shorts originally included various characters in blackface. A replacement program was begun at the end of 2006, two years after the set's initial release. Warner Home Video has corrected the problem and the set can be purchased without any problems.

Consumers have also expressed disappointment at the fact that, although advertised as being "restored and remastered", none of the fullscreen-format cartoons on the first volume are restored, having been sourced from the same transfers used for television. However, all widescreen/CinemaScope cartoons are restored in their original aspect ratios.

Complaints also arose over Mouse Cleaning and Casanova Cat being omitted from Volume 3 because of racial stereotyping, according to a Warner Home Video press release.[1] These two shorts were the only Tom and Jerry shorts from the Hanna-Barbera era not present on DVD. These two shorts can be found on the European Classic Collection DVDs. There were also complaints about His Mouse Friday presented edited on that subsequent DVD release.

Other notes on sets