Start a Wiki
Welcome to Tom and Jerry Wiki 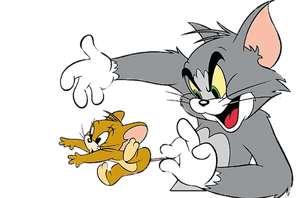 Tom and Jerry first premiered in 1940, featuring a cat named Tom chasing a mouse named Jerry through their home, the streets, and around the world! These cases often involved Tom getting into awkward situations and being putting immense pain while Jerry toyed with him and got the last laugh.

As the cartoons progressed throughout the 20th Century and into the 21st Century, the stakes got higher and higher and higher, with involvement of criminals, long voyages to the other side of the world, and even trips to the space!

Of course, Tom and Jerry were never alone and a host of other hilarious characters helped or hindered their adventures, including Spike Bulldog, Nibbles Mouse, Butch Cat, and more!

If you see this, your JavaScript might be disabled or DiscordIntegrator plugin isn't working. If the latter, please contact a wiki administrator.

Retrieved from "https://tomandjerry.fandom.com/wiki/Tom_and_Jerry_Wiki?oldid=114501"
Community content is available under CC-BY-SA unless otherwise noted.